Ruby's latest creation is her most diabolical plan yet to turn Brandy against Ash; Pablo suspects something isn't right with Kelly when she meets him and Ash at the school; chaos ensues when evil shows up at the dance. Pablo ultimately realizes the truth about the bad premonition he felt in previous episode and rushes to inform Ash that Kelly is not whom she appears to be, only to run into Demon Ash.[2]

The demon child that underwent metamorphosis in previous episode has now fully matured into demonic copy of Ash Williams. This Ash possesses none of humanity or positive attributes that original Ash possesses and has all the evil vibes as demonic spawns born of Ruby would and should have. Ruby orders her spawn to sever his demonic saw arm and replace it with a more human-designed saw so that way he can truly look like real Ash. The demon spawn complies loyally.

Meanwhile, at Ash's hardware store Zoe is still grieving over the loss of her fellow knights: no matter how much training and armament she and her fellows brought nothing in the world had prepared her for one real combat against actual deadite. Pablo discovers the real Kelly's soul is trapped within Deadlands through the seal written in Sumerian writing. Kelly, who is constantly being pursued by unseen evils, tells Pablo everything that happened to her from the previous episode and warns Pablo. Hardly having a time to mourn for the loss of his crush, He rushes to find Ash to break the news.

Meanwhile prom night is to be held at Brandy's high school, and Brandy wishes to go there at the request of her counselor. Ash at first refuses her plea. But at Kelly/Kaya's urging plus Brandy's wish to put her confusion regarding evil entities to rest he reluctantly lets his daughter attend prom with Kelly in tow, unaware of the fact that Kelly is not at all whom she appears to be. On the other hand, with the possession of Kandarian dagger Ash eagerly seizes the opportunity to kill Ruby for good.

It is the decision he would wish he can take it back.

At the high school, people still recognize Ash as 'Ashy Slashy', forcing Ash to tag Brandy along with Kelly-Kaya to enter school's front door while he looks for rear entrance to avoid unwanted attention from other people. Unknown to Ash, Ruby is not attending the prom by herself: Her Ash lookalike spawn is also tagging along with her, with a mass murder in mind: Ruby has given him mission to slaughter as many attendants as he can so real Ash gets incriminated for slaughter he is about to committ. Ruby then proceeds to separate Brandy from the rest of guests and as usual, attempts to manipulate, confuse Brandy: Ruby tells Brandy that she has been hiding things from her, that there is evil in Elk Grove, but that it’s all because of her father. By claiming that her father is not just a psychotic serial killer, but also an evil being. Having a hard time believing, Brandy angrily storms off and leaving Ruby and Kelly-Kaya by themselves. Alone together, Kelly, now speaking as Kaya, voices her uncertainty of Brandy's newfound bond can be broken. But Ruby, tells Kaya to keep prodding Brandy while her demon spawn would carry out the rest of her agenda. Only when Ruby's scheme succeeds which would lead to the defeat of Dark Ones can Kaya truly be freed and gain true immortality. Demon Ash, picking off few isolated students outside the dance hall at first, encounters confused Brandy. He shows her one of his mangled victims and displays his demonic facade, frightening her to run back to the dance hall. Soon after Demon Ash crashes into the dance hall, slaughtering anybody he can get his hands on and turning the party into an abattoir. And Brandy watches all the occurring carnage live in shock and horror.

Ruby’s plan was to have her Demon Ash showing up at the prom and start his murder, showing himself to be an evil demon to Brandy, and then hide when the real Ash comes by to save Brandy so she will be thoroughly convinced that her father is indeed evil and he needs to be stopped.

When real Ash finally arrives and gets to Brandy, Demon Ash slips away unnoticed seconds before real Ash came in. Ruby, using her supernatural powers, locks away all exits, trapping all remaining survivors in the dance hall. In an attempt to break Brandy's trust of her father, trying even more to convince Brandy he’s evil and to have her ultimately kill him, Ruby plunges herself into Ash's chainsaw and fakes her death, giving the impression that she died trying to protect Brandy. Fortunately contrary to Ruby's intention, Brandy could not bring herself to kill Ash.

Pablo stumbles onto Kelly/Kaya but with his newfound power, Pablo realizes for certain that Kelly standing before him is not Kelly. Pablo subdues her and demands her who she really is at gunpoint. Once again speaking as Kaya, she tells him who she really is and approaches the armed young shaman, daring him to kill her if he can. Kaya, using Kelly's superior physical prowess, snatches Pablo's revolver from him and claims it as hers. Kaya then attempts on Pablo's life but the revolver she had gets run out of bullets, allowing the brujo especiale to escape. After surviving his near fatal encounter with Kaya, Pablo rushes to find Ash to tell him that the real Kelly is dead, only to run smack into Demon Ash who is hiding and waiting out. Upon physical contact Pablo realizes that Ash before him is not real Ash. Demon Ash then attempts to kill Pablo but the Honduran successfully fends him off, fighting their way back into the bloodied dance hall where real Ash, Brandy, Ruby and surviving students are congregated.

After being exposed before everyone and cornered Demon Ash has his head finally blown off by real Ash, greatly damaging Ruby's grand scheme of making her spawn becoming the new chosen one to fight against oncoming Dark Ones. The victory is Pyrrhic which comes at a great cost, though:

Before Pablo can tell Ash the fate of real Kelly, Ruby becomes frustrated of being constantly thwarted and having her trump card against Dark Ones ruined by Ash. The enraged Demon Woman of Fire, in spite of her eviscerated state, rises up to her feet much to the astonishment of all survivors present including Brandy (who by now realizes her father had been right about her 'counselor' all along). Cursing at the Prophesied One, Ruby throws Kandarian dagger at Ash but Brandy shielded her father, took the dagger in the back instead and died. Taking advantage of Ash being distracted by the loss of Brandy, Ruby escapes.

Brandy meanwhile wakes up in Deadlands, and runs away from surrounding threats screaming. 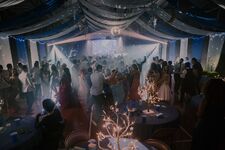 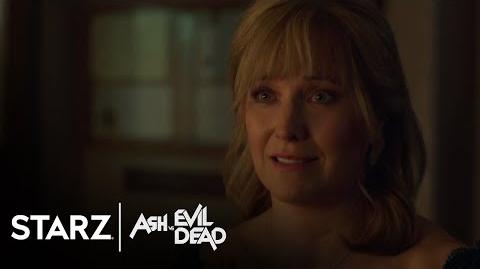 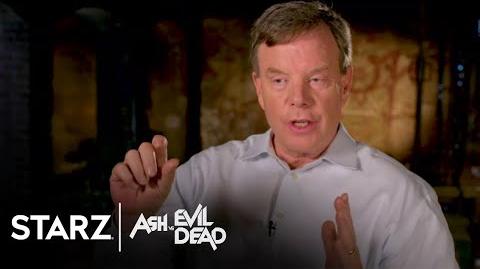