The Oldsmobile (sometimes referred to as "The Delta" or "The Classic") is a 1973 Oldsmobile Delta 88 Royale owned by Ash Williams, serving as Ash's main mode of transportation throughout the Evil Dead franchise.

The Oldsmobile first appeared in The Evil Dead, and went on to appear in all forms of expanded media, including official video games, comics, and Ash vs Evil Dead.

Very little is known about the Oldsmobile's "life" prior to being owned by Ash Williams, except it eventually ended up at the Elk Grove Destruction Derby arena. Brock Williams purchased the car from the Derby and gave it to his son, Ash.

Weekend At The Cabin

After taking the Delta in for a tune-up, the Oldsmobile, driven by Scotty, took Ash and his friends to what they assumed to be a abandoned cabin in the mountains. As the group approached the cabin, the car was briefly under the control of an unseen evil, attempting to kill the group by swerving the car into the path of an oncoming log truck. After arriving at the cabin, the Delta wasn't used again until Cheryl Williams begged her brother Ash to take her into a nearby town after an assault by the living woods. However, the trip did not end up being successful, as the bridge crossing a massive ravine had been destroyed.

During Ash's second day at the cabin, he attempted an escape from the woods and cabin in his Oldsmobile, but was once again stopped when he came to the destroyed bridge. Later in the night, the Delta was pulled into a time vortex opened by Annie Knowby. Both the car and Ash were sent to medieval England, circa 1300 AD.

After realizing that the Oldsmobile could aid him in his battle against a army of Deadites coming to take the Necronomicon, Ash Williams (along with the assistance of a local Blacksmith) converted the Delta into the steam-powered "Deathcoaster". As "The Deathcoaster", the Delta was outfitted with a large spinning blade emerging from the hood, a large plow attached to the grill and front bumper, and several wooden spikes attached to the left and right sides by the doors. Ash flipped the car when Sheila, a local resident whom Ash had developed romantic feelings towardsm had stepped into the path of The Deathcoaster.

Return To The Present

How exactly the Delta returned to the present after its trip into 1300 AD is unknown, but it was eventually converted back into its "original" shape. At another unknown point in time following its return to the present, Ash Williams outfitted the car with nitrous oxide (activated by a switch on the dashboard).

30 years after the events at the cabin, the Delta was still owned by Ash Williams. The Oldsmobile (and the trailer hooked up to it) is the primary transportation of Ash, Kelly Maxwell, and Pablo Simon Bolivar, taking them across the United States to battle the Deadites and various Demons unleashed upon the world of the living.

Following Ash's return to his hometown of Elk Grove, the Delta was possessed by the forces of evil after it had been stolen by teenagers, turning it into a sentient killing machine that terrorized the citizens of Elk Grove. Ash managed to stop the car by driving his chainsaw through the hood. Once again, the car was repaired and went back to being his transportation. Shortly after its repair, the car traveled through time once more, taking Ash, Kelly, Pablo, and Ruby to 1982.

After the defeat of Kandar The Destroyer by Ash Williams, the Knights of Sumeria recovered Ash's Oldsmobile amid the chaos of the world ending and placed it in a secure bunker (along with Ash himself). When Ash was awakened many years later, he discovered his car had been modified once more. This new variation of the Deathcoaster featured two mounted machine guns, LED lights, a swiveling mount for Ash's Boomstick on the driver's door, and a blade from a bulldozer with "Hail To The King" written in white paint.

A "dead" version of the Oldsmobile was located in the Deadlands.

A rusted 1974 Oldsmobile was seen in the woods surrounding a cabin belong to the Allen family.

During Ash's trip to Damascus, circa 730 AD, the Delta was once again pulled through time along with its owner. While in Damascus, the car was converted into a shop by a local merchant, with Ash frequently returning for various items located within the car itself.

This version of the Oldsmobile once again serves as Ash's primary method of transportation on Earth-818793. Over the years, the car takes quite a beating, from having its window smashed by vampires, driving it into Jason Voorhees (where it sank to the bottom of a frozen Crystal Lake), and meeting its seemingly permanent end as it burned in a ball of flame while attacking The General's army.

During the time which Ash's original Delta was lost at the bottom of Crystal Lake, Ash drove a blue Oldsmobile outfitted with spikes on the front bumper.

Ash And The Army of Darkness Universe

In this reality, Ash Williams left his modified Deathcoaster in 1300 AD. When the locals fled Castle Kandar following another onslaught from the Deadites, the car was left behind. Ash was eventually reunited with the Oldsmobile when Sheila, The Wise Man, and himself were searching the ruins of the castle.

A new version of the Oldsmobile was purchased by a simulacrum copy of Ash Williams during his time as an Uber driver. Though he claimed that it was the original car he owned prior to going to the cabin, this would be impossible, as the "real" Oldsmobile went back in time with the "real" Ash Williams.

Ash vs. The Army of Darkness Universe

This universe's version of Ash's Oldsmobile was vandalized shortly after his return from 1300 AD. In return for helping hunt down a Deadite threat at Alan Shepard High School, the students of the school's shop class repaired the Delta for Ash, outfitting it with two enormous saws that emerged from two panels on the hood. Ash later drove the car from Michigan all the way to Charleston, South Carolina, where he encountered the undead Blackbeard and his crew.

Behind the scenes of Army of Darkness

Behind the scenes of Army of Darkness

The Delta and the Airstream Trailer

Ash and Pablo in the Delta (Bait)

Ash on the hood of the possessed Delta (DUI) 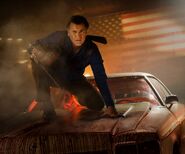 The possessed Delta and Ash (DUI)

The Delta on the streets of Elk Grove

Lexx unveils the modified Oldsmobile (The Mettle of Man)

Behind the scenes of Ash vs Evil Dead with Rob Tapert, Bruce Campbell, and Sam Raimi

The Delta slams into Jason Voorhees (Freddy vs. Jason vs. Ash #6)

Ash is reunited with the Deathcoaster (Ash Gets Hitched #2)

The Deathcoaster goes up in flames (Furious Road #5)

The Delta is vandalized outside S-Mart (Ash Vs. The Army of Darkness #0)

The Delta's upgrade, courtesy of Alan Shepard High School (Ash Vs. The Army of Darkness #5