The Killer of Killers

"The Killer of Killers"

Ruby and Amanda arrive at the Brujo's ranch just having missed Ash, but the charred skeleton of the Brujo emerges from the funeral pyre and confronts Ruby telling her that she'll never have the book for herself. The two fall into the pyre which then explodes.

On their way to the cabin, Ash, Pablo and Kelly stop at a roadside diner to meet Lem, a old militia friend of Ash, and ask for help in acquiring some weapons.

While Ash tries to scam his way out of paying the diner check, Pablo and Kelly return to the trailer and deal with the Necronomicon which comes alive and reacts to the Brujo's medallion.

Meanwhile, Amanda confronts Ash and arrests him, just as her police chief arrives. Soon however, the evil force attacks the diner turning the police chief, and a waitress, into Deadites.

Having barely escaped the horror, Lem calls his militia buddies to "arm up" but he is soon attacked by the evil force.

Back at the smoldering diner, Amanda agrees to join up with Ash's group.

Ruby and Amanda arrive at the Brujo's barn and drive past the burning talisman posts. The two women get out and Ruby tells Amanda to look outside while she goes inside. As they look around, they hear the backfire from Ash's car.

Inside the house, Ruby finds a goat. A shadowy figure briefly appears behind her, but disappears when Ruby turns to look.

Outside, the Deadite force possesses the Brujo's burning skeleton and confronts Amanda. She shoots it without effect, and Ruby picks up a scythe and holds it off. The Deadite accuses Ruby of double-crossing them, and warns that the others will never let her get the Necronomicon. Ruby spins the skeleton into the pyre and falls in with it, and there's a huge explosion. Amanda approaches the fire but there's no sign of Ruby or the skeleton. Exasperated, Amanda gets into Ruby's car and discovers that Ash's severed right hand is gone.

Ash, Pablo, and Kelly stop at a diner, the Western Moose, for food. Pablo and Kelly wash as Ash chows down. He says that when he was on his acid trip, he saw some things that make his next step very clearly. He figures that he has to go back to the cabin where it all began. Behind them, a waitress drops her plates. Pablo and Kelly are eager to go, but Ash says that he won't endanger them any further. If they go to the cabin, then the Deadites would possess them and he'd have to cut off their heads. Pablo and Kelly insist on getting some revenge and Ash says that he'll think about it. Ash's associate Lem comes over and Ash introduces him to the others. Lem asks to talk to Ash privately.

Meanwhile, Amanda watches from across the road through a pair of binoculars.

Inside, Lem asks if he can use Ash's discount to get some ammo, supplies, and assures Ash that he's clean and sober nine days. He invites Ash to join the militia and says that they have some cool toys he could use. Ash considers it and asks where their camp is, and guesses where it is.

At the table, Kelly asks why Pablo is acting so weird. He insists that there's nothing wrong, and Kelly invites him to take out his anger over his uncle's death on her. Pablo admits that it's not that, and finally says that she when she was possessed, she tried to fuck and kill him. He doesn't understand the sex part, and wonders if part of it was her. Ash comes back before Kelly can answer, and he says that he has to stop somewhere before they go to the cabin.

The waitress, Nancy, drops off the check. Nobody has money, and Kelly and Pablo remind Ash that he offered pay. Ash tells them to wait in the trailer while he pays off.

Amanda calls Lieutenant Boyle and says that she's tracked down Ash from the trailer park homicide. Boyle reminds her that she isn't on duty, and Amanda asks him to bring Ash in and run DNA to confirm he killed everyone at the trailer park. Boyle tells her to stay put until he gets there.

In the trailer, Kelly finally asks Pablo to describe how she tried to seduce him when she was possessed. When he does, Kelly laughs and asks how he responded. Pablo says that he blacked out and doesn't remember, and Kelly figures that Eligos was preying on what she thinks about him. She likes Pablo like a brother and Eligos twisted it to make her seem insane. Pablo reluctantly agrees... and notices his uncle's amulet twitching. Something bangs on the trunk holding the Necronomicon, and Kelly hesitantly opens it. The Necronomicon is attracted to the amulet, and Kelly manages to pull it off and throw it on the bed.

In the diner, Nancy comes back for the check and Ash offers to pay his check with sex because it's much more valuable than $22.29. Nancy points out the chef and says that he's her husband, and Ash tells her to play it low-key and meet him in the men's room in three minutes.

In the trailer, Pablo and Kelly lock the book in the trunk. Pablo wants to blow it up but Kelly reminds him that they need it against the Deadites. Surprised, Pablo figures that Kelly wants the Necronomicon around so more Deadites will show up and she can kill them for revenge. He warns against revenge, but Kelly figures they'll be dead before then.

Ash goes into the restroom and Amanda, watching, gets her gun. Meanwhile, Ash makes some makeshift cologne out of sink water and mints. Amanda breaks in and arrests Ash, while a boy listens in the toilet stall. Ash insists that he's not a killer as Amanda frisks him, and then struggles with her for her gun. She knees him in the groin, throws him into a urinal, and grabs her gun back.

Amanda takes Ash out just as Boyle arrives, and Lem quickly sits down. Boyle confirms that the sketch they have of the killer matches Ash's description, who insists that he's the only one who knows how to fight the Deadites, just as the diner shakes. The lights flicker and the TV goes out, and the Deadite force slams into the diner. Debris flies everywhere and people are killed, and a terrified Lem runs out. A Deadite possesses Boyle and attacks Ash, and Amanda shoots it. The boy from the restroom tries to run, and the Deadite throws him into the ceiling fan. Another Deadite possesses Nancy and attacks Ash, but he impales her with the screwdriver attachment on his new hand. He then grabs the Boyle Deadite and stabs it in the head. The Deadite throws him over the counter, but Pablo and Kelly arrive and toss Ash his chainsaw and shotgun. He disembowels the remaining Deadite and then blows its head off. The Nancy Deadite comes back and Pablo slides across the floor, shooting her. When she doesn't go down, Kelly shoves her into the kitchen and runs her head through the meat slicer and beats it with a meat tenderizer while Ash and Pablo watch.

Lem runs through the forest and calls Crosby at the militia camp. As he starts to describe what he saw, he hears something behind him. He turns and drops the phone. The Deadite force catches him as he tries to run.

Ash finds some pie without blood and gives it to Kelly and Pablo. He then goes back to Amanda and suggests that she can come with them. They need someone with her "physical qualities," and Amanda agrees to come... with him. 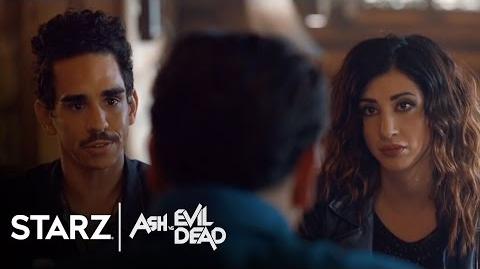 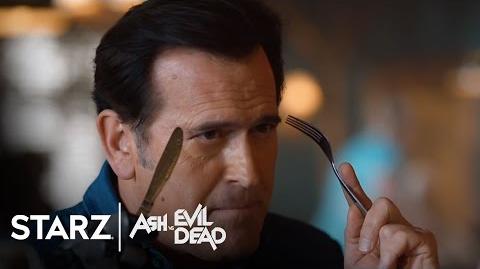 Ash vs Evil Dead Ep. 106 Clip Back to the Cabin STARZ