The Eligos-possessed Kelly convinces Pablo and his uncle that Ash is the one possessed. Elsewhere Amanda and Ruby close in on Ash by using Ash's severed undead hand to guide them. The Brujo prepares for an exorcism while back in Ash's trailer, Kelly tries to seduce Pablo and later kill him. Once the demon reveals himself the Brujo performs the exorcism on Kelly, forcing Eligos to leave, but not before the Brujo is killed. During a funeral for the Brujo, Pablo takes his uncle's sacred medallion. Back at the trailer, Pablo gives Ash a new mechanical hand that he had been working on.

Ash wakes up bound and gagged. Kelly is telling Pablo and the Brujo that Ash choked her and Eligos was possessing him. The Brujo explains that Eligos is a demon of the mind and must have slowly took control of his mind until Ash's vision quest. He says that he's going to try and exorcise Eligos, removing a lump in the brain if necessary with a knife. If that doesn't work then the brujo will do what he must. As the others leave, Kelly's eyes turn black and Eligos promises that Ash's soul will soon be his.

After getting his uncle ingredients, Pablo goes to the trailer and finds Kelly waiting for him. She reminds him that Ash wanted to summon a demon in the first place, and says that they need to stay calm while the Brujo does his job. Kelly looks for alcohol and finds some marijuana, and says that getting high is the best plan.

Ruby and Amanda drive across the country following the twitches of Ash's severed hand. As they wait at a crossroads, Amanda asks how the possession works. Ruby says that she used to be like Amanda and thought everything should be logical and make sense. She tells Amanda to relax, just as the hand points the direction they should go.

Pablo comes back with a pipe and finds Kelly already smoking using a shotgun barrel. She invites him to join her, and Pablo begins to suspect something is wrong. Kelly tells him to take one hit and Pablo sits down and admits that he's been wanting to get closer to her. He asks if she wants the same thing, and Kelly agrees.

El Brujo waves sanctified charms at Ash, who ignores them. Surprised at the lack of response, the brujo begins the blood ritual.

Kelly assures Pablo that she wants to be with him. She assures him that what's inside of her can't wait to tell him up, and tells Pablo to get on with it. As he takes the shotgun, Kelly pockets a shotgun shell and says that Pablo can kiss her once he takes a hit. As they talk, she secretly slips the shell into the barrel. Pablo has second thoughts and Eligos takes full control, trying to force the barrel in Pablo's mouth.

Ash manages to work the gag free and tells the brujo that Eligos took over Kelly. They hear a shotgun blast and run to the trailer, and find Pablo trying to shoot Kelly. Pablo admits that he can't shoot her, and they grab Kelly as she charges forward. They take her to garage and the brujo performs the blood ritual, but Eligos laughs at them. Ash dares Eligos to come out and fight like a man, and Eligos spits out Kelly's teeth. The brujo pours leeches down Kelly's throat, and Kelly vomits all over Ash's shoes.

The brujo administers the sanctified water, pouring it on a cloth over Kelly's face. She reverts to normal momentarily but then Eligos takes over and invites them to do it again. Pablo tries to get through to Kelly, but Eligos has her spit on his chest. As Eligos slams Kelly's head into the post behind her, Pablo begs Kelly to fight it. The brujo leads his nephew out and Pablo blames himself and begs his uncle for forgiveness. Despite that, the brujo says Pablo has the calling and managed to find El Jefe inside of Ash.

Inside, Kelly apparently takes control and begs Ash to kill her. He aims his shotgun at her and Kelly says to put a cross on her grave. Ash remembers that Kelly is Jewish, and Eligos laughs as he takes back control.

The brujo tells Pablo that their only choice is to kill Kelly or let Eligos does it. Pablo suggests that they give Eligos another host, and walks back inside. He goes to Kelly and tells Eligos to take him. Eligos reaches out of Kelly's throat and grabs Pablo, throwing him away, and then crawls out of her mouth. He teleports away before Ash can shoot it and torments the brujo, and impales him on a metal post.

Unable to hit the teleporting demon, Ash remembers what he learned in his vision quest about not thinking about what he's doing. When Eligos teleports back over to him, Ash tosses his shotgun in the air and swings with his chainsaw. When the demon teleports away, Ash grabs the shotgun and shoots at where he figures Eligos will be. He blasts the demon to pieces and goes to Kelly, who has no memory of what happened.

Later, the trio makes a funeral pyre for the brujo and Pablo lights the fire. He says goodbye to his uncle and the brujo's amulet falls out of the fire. Pablo picks it up and thanks his uncle for the gift, and promises not to let him down. He then joins the others at the trailer as the talismans burst into flame.

In the trailer, Ash gives Kelly an ice pack and explains that she spit out a few teeth. Pablo shows them the amulet and Ash blames himself for what happened to both of them. Kelly agrees with him, and Pablo gives him the artificial hand that he made for him. Ash straps it on and Pablo explains that he can make a fist with it so that they can all bump fists together before leaving. 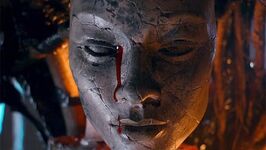 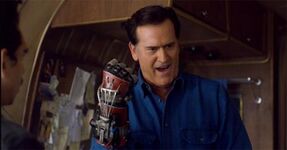 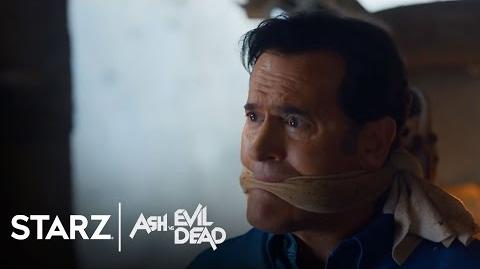 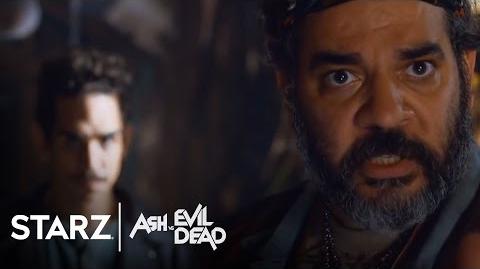 Ash vs Evil Dead Ep. 105 Clip All Feeling From the Waist Down STARZ