This article is about the episode, for the creatures see The Dark Ones.

"The Dark One" is the tenth and final episode of the first season of Ash vs Evil Dead, and the tenth overall episode in the series. It was written by Craig Digregorio and directed by Rick Jacobson.

Before Ash can react to what is going on, Amanda returns and attacks him. He manages to defeat her but notices Ruby and Pablo have disappeared into the cellar. He goes down to find them but the evil force pounds the cabin and Ash falls down the steps.

He suddenly finds himself back in his trailer with the Necronomicon. Ruby appears and tells him that he was destined to stand against her, but she tries to broker a truce by offering him what he desires the most – a peaceful retirement in Jacksonville. Refusing the offer, Ash find himself back in the cellar and under attack by a demonic child the book-possessed Pablo had belched up.

Eventually Ash has a final showdown with Ruby where she promises that if she releases the evil she can keep it under her control. She promises to let Ash and his friends live in peace if Ash accepts her deal. Ash of course, makes the worst decision possible. As a result, Ash hits the road with Kelly and Pablo in tow, while the radio reports sinkholes opening up around the world.

As a storm gathers outside the cabin, Kelly tries to pull the book cover off of Pablo's face.

Meanwhile, Heather watches as Ruby explains that she wrote the Necronomicon. Now that she has it, she can unleash Hell on Earth. Heather heads for the door only to find the Deadite-possessed Amanda blocking her way. The Deadite flies into the room past the girl, and she grabs Ash's chainsaw before he can and swings it at him.

Pablo begs Kelly to get the cover off, but then the demon occupying it takes him over and tells Kelly to get back. Ruby slaps Kelly across the room, grabs Pablo, and drags him away while Heather goes to the unconscious Kelly.

Ash manages to grab the chainsaw blade with his new metal hand, yanks it away, and punches Amanda. She flies to the ceiling, and Ash quickly detaches his artificial hand, attaches the chainsaw, and disembowels Amanda when she comes at him. Once the body goes down for good, Ash looks around and realizes that Ruby has taken Pablo down into the cellar.

Ash loads up and prepares to enter the cellar, refusing to lose anyone else he cares about. He figures that they're dealing with the Dark Ones, and Ruby will summon demons and devils. Ash tells Kelly and Heather to guard the trapdoor and make sure that it stays open. Kelly insists on going with him, saying that it's her Pablo down there as well. Ash agrees and they all head down. The Deadite force slams into the cabin, and Ash falls down the stairs as the trapdoor slams shut behind him.

Much to his surprise, Ash finds himself much younger and back in his trailer. The tattoo girl, Lucy, is there with him, and tells him to read the Necronomicon "poetry" to her. Ash realizes that he's holding the book, and Lucy claims that Ash never read the book to her before. He figures the whole thing that has happened was a dream and tosses the book away.

Ruby appears and Lucy disappears, and she explains that long ago Ash appeared in the Necronomicon. She knew he was the one destined to stand against her, and she doesn't want him and the others to die. Ruby wants the Dark Ones to rule over the evil forces on Earth, consolidating them under herself. She asks what Ash wants so he'll get out of her way, and reminds him of his dream of going to Jacksonville. Ash refuses and Ruby tells him to lay down his weapons and go back to his life. Ash starts to agree but then grabs his shotgun and tries to kill Ruby. It doesn't fire, and Ruby blasts him back into reality in the cellar.

Kelly and Heather are unable to get the trapdoor open, and something moves in the cellar. Ash turns on a light but it quickly burns out, and he catches a glimpse of a corpse-like figure. Pablo screams in the next room, and Ash follows the sound.

Up above, Kelly opens fire on the door with her assault rifle but it quickly runs out of bullets. The bullet holes in the trapdoor bleed, and the tape recorder starts playing. Heather wants to leave, but Kelly grabs an axe and starts chopping the trapdoor. Meanwhile, Heather sees a bug crawl down her arm and then more bugs swarm out of her pants and up her chest. Kelly turns around and realizes that the girl is hallucinating, and slaps her until she snaps out of it. She then tells Heather that if they leave then there won't be a tomorrow for anyone. As Heather snaps back at her, an eye appears on the wall and Kelly smashes it. The trapdoor swings up, knocking Kelly into the ceiling, and then the door slams open and knocks Kelly outside. The door closes before Heather can get out, and Kelly is unable to get it open.

In the cellar, Ash finds the corpse of Jake, who is now just a pile of bones . He continues on to the next room and hears Ruby chanting as Pablo screams for help. Ash secretly listens as Ruby tells Ash that he'll be dead as soon as her children are free, and writes a new page using Pablo's blood and the Dagger. Pablo coughs up a slug like fetus, which quickly grows to resemble a human child and emerges from its membrane. Ruby commands it in Kanderian and the creature climbs through the roof.

Kelly yells at Heather to get to the door, and something yanks her away. A couch moves toward her and then flies through the air and lands on Heather's legs. She pulls them free and the nails pop out of the wall and floor, shooting into her flesh. Heather crawls to the door, but something glows red behind her and then pulls her into the next room.

Outside, the knob grows a mouth and Kelly jumps back as inside, Heather screams. Blood flows under the door and then it opens, and a geyser of blood knocks Kelly back. Parts of Heather's corpse are among the blood, and Heather's severed head laughs. It says that Ash has failed and the world belongs to the Deadites. Kelly kicks it away and goes to the cabin.

As Ash braces himself to charge in, one of the child-creatures moves up behind him. He finally turns and it stares at him, and Ash gives it until the count of three to leave. Ash can't bring himself to shoot it, and the child-creature leaps on him. After dropping his shotgun, Ash manages to throw it away and it disappears into the shadows and then bites his arm. He pokes it in the eyes, and it crawls on his back. Ash finally drops to the floor, knocking it loose, and grabs his shotgun. It bites his leg, and Ash sticks the shotgun barrel in its mouth and pulls the trigger.

Kelly runs around the cabin trying to find an entrance, and finds a can of gasoline. Behind her, one of the child-creatures moves through the darkness. Meanwhile, Kelly finds a flare and douses the cabin wall with the gas. She lights the flare and tosses it, and the cabin starts to burn.

Ash enters the next room, and a black-eyed Ruby charges at him. He shoots her repeatedly, knocking her back, and prepares to decapitate her.

The cabin shakes and bleeds, and the doors and shutters open. Kelly charges in and one of the child-creatures crawls out of the cellar and runs out.

Ruby starts chanting again and Pablo leaps on Ash. He throws him off, but Pablo says that he has no choice and hits his friend with a hammer. The demon takes over and Ash insists that he won't fight and lose someone else. Pablo fights for control but Ruby reinforces her chant and the possessed Pablo attacks Ash, slamming him back through the door.

Kelly grabs an axe and enters the cellar, and one of the child-creatures charges toward her with a flashlight. It disappears into the darkness and then crawls out of the cellar. Kelly grabs the flashlight and follows the sounds of fighting.

Ash pins Pablo to the ground and begs him to stop, and Pablo grabs the chainsaw and tells Ash to kill him. He pulls the blade down to his head... and it stops. Ash realizes that it's out of gas, just as Ruby heals her wounds and commands the demon to attack Ash again. While Ruby completes the ritual, the possessed Pablo grabs the shotgun and prepares to shoot Ash. However, Kelly arrives and knocks the shotgun out of its hands.

While they struggle, Ash tries to grab his shotgun... but Ruby slams her foot down on it. She picks him up by the throat and prepares to carve his face off to make a new cover for the Necronomicon.

As Ruby draws blood, Ash tells her to wait because he needs to know one thing. He asks if she's lost weight, grabs the Dagger, and scratches her throat and then cuts her hands. The cuts burn, and Ash orders her to get the book off of Pablo's face. Ruby points out that he can't kill her because then he'll have no choice, while the possessed Pablo chokes Kelly. She suggests that Ash take the deal she offered earlier, and insists that her master plan actually depends on humanity to flourish because "without good, there is no evil". Ruby says that she just wants evil under control, and reminds Ash that he never signed up for any for it. Ash considers and then refuses, saying it's not about his life anymore. He wants Kelly and Pablo to get their lives back as well, and Ruby says that she can do it. Ash asks for proof, and Ruby frees Pablo from the possession. He yells at Ash not to do it, and Ash says that he's doing it for him. Kelly doesn't believe that Ruby will just control the demons, but Ash tells her to trust him.

Ash demands a trip to Jacksonville for all three of them, and $10,000. Ruby points out that she isn't a bank, but agrees to provide gas money. Ash agrees but says that he's keeping the dagger as insurance. Pablo screams at him not to do it, but Ash takes the postcard of Jacksonville and thus seals the deal. The cover flies off of Pablo's face and reattaches itself to the Book, and there's a flash of light...

Soon, Ash, Pablo, and Kelly are in Ash's car heading for Jacksonville. Ash figures that he's finally got everything he wants, and figures that Ruby will keep a lid on all of the evil. An emergency warning comes on the radio talking about massive sinkholes opening across the state, and Ash nervously turns it off. He puts in a tape and they continue on... while a sinkhole leading to Hell opens behind them. 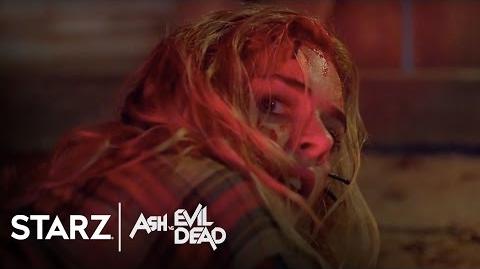 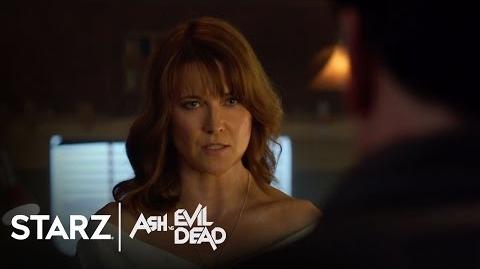