Shelly was Scotty's girlfriend and one of Ash's friends in the original Evil Dead film. She poses the role of the "whore" archetype, and is the second to become possessed by the Kandarian Demon.

She, Linda, Cheryl , Ash and Scotty travel to the Michigan mountains for a weekend vacation in a remote cabin. She and Scotty sleep together after playing the Necronomicon recording.

While Shelly plays hearts with Linda, Cheryl gets possessed by the Evil and attacks them. Shortly after, Shelly retreats back to her room where she is possessed when a demonic force breaks through her window and abducts her. After that, she attacks Scotty, scratching at his face, who retaliates by throwing her into the fireplace, severely burning her face. Deadite Shelly screams while on fire and Scotty pulls her out, only for her to resume attacking him, trying to force his head into the fireplace to return the burning, and then trying to stab him with the dagger from the cellar. Scotty pulls out his own hunting knife and slices through her hand, causing her to bite it completely off. He then stabs her in the back with the dagger, but she doesn't die. Scotty finally ends up dismembering her with an axe after first yelling at Ash to do it. After this, she is dead, and Scotty and Ash bury her remains and place a cross on her grave.

Appearances In Other Media

Shelly made her comic debut in The Evil Dead 2008 Comic. This version of Shelly is almost exactly like her film counterpart, except she is more hostile to the other people in the cabin. In a flashback sequence in issue #2, Scotty, Ash, Linda, and Shelly were in a park when Shelly found a bird with a broken wing. Shelly, feeling bad for the injured animal, proceeded to jump on the bird until it was nothing more than a pile of bones and guts.

Shelly venturing to the cabin with her friends.

The Evil spying on Shelly. 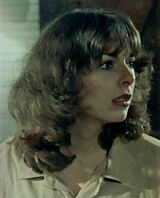 Shelly being tormented by Cheryl.

Shelly as a deadite.