Rick Jacobson
"Second Coming" is the tenth and final episode of the second season of Ash vs Evil Dead and the twentieth episode overall in the series. It was written by Luke Kalteux, and directed by Rick Jacobson. It premiered on December 11, 2016.

As Ash and Tanya fight for their lives after being locked up down the fruit cellar with the Deadite Henrietta, Ruby and Kelly battle the past to get to a future where Pablo is alive and the world is safe from evil. In his last-ditch attempt to save all Ash challenges Baal to a duel on fair and even terms. If Ash wins, Baal returns to hell. But if Ash loses... Baal will be free to deal with humanity any way he sees fit.

As Professor Knowby attempts to escape the cabin, he is murdered by Ruby of the year 1982, who then steals the Necronomicon. Meanwhile, down in the fruit cellar Ash once again battles Henrietta and is ultimately victorious. But not before Tanya was killed by her.

As Ash reunites with present Ruby and Kelly, past Ruby learns of their involvement and then kills present Ruby while Ash and Kelly attempt to escape. The effects of the timeline alteration take place as Ash notices the return of his missing right hand, and Pablo seemingly returning to life. However, Pablo is actually revealed to be Baal, who had secretly taken over Pablo's body in the present rather than being banished as previously thought. Baal and past Ruby capture Ash and Kelly, taking them back to the cabin, where they begin to perform rituals to give birth to their spawns.

As a last ditch effort to save all, Ash proposes a duel between him and Baal without the use of any magic or weapon. If Ash wins, Baal and his minions are to be sent back to Hell, and Pablo is resurrected. If Ash loses, humanity, Ash and Kelly are all Baal's for the taking. Ash and Baal fight with the former displaying better fighting ability but as the fight goes on, Baal reneges on his vow and uses his powers, shape-shifting into Chet and Cheryl, taunting Ash and sawing his right hand off once more. Brock appears to Ash, but Ash, thinking this is another ruse by Baal, attacks and drowns his father in the bathtub. Afterward, Brock's body disappears and a chainsaw appears in its place, Ash hearing his father's voice telling him to take the saw. Ash attaches the chainsaw to his newly severed stump. As Ash and Baal have a chainsaw fight, both wielding different time periods of the same chainsaw, Ash is disarmed and knocked into the living area of the cabin. With Baal seemingly having triumphed and poised to deliver the final killing blow, Ash feigns defeat and distracts Baal long enough to defeat the demon with his own claw. As part of the blood deal sealed and overseen by the Necronomicon, Baal is vanquished to the Netherworld along with his spawns, and the cabin is engulfed in fire. Post-chaos, Pablo rises from the cabin's ashes, and Ash returns home revered as a town hero. Ash, Kelly, Pablo and Linda celebrate their victory as past Ruby watches from afar.

In a post-credit scene, we see the Necronomicon at the site of the burnt cabin being found by an unknown traveler. 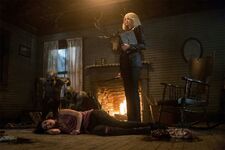 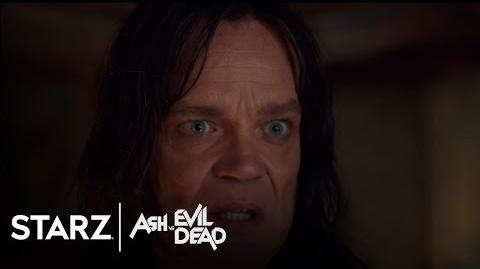 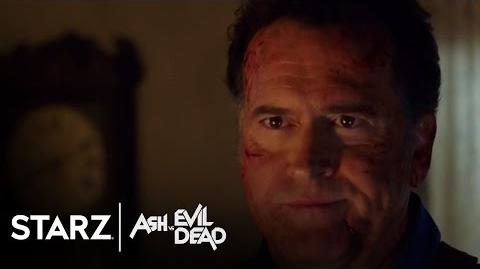