S-Mart is a department store that Ash Williams and his girlfriend Linda worked at. The company's slogan is: "Shop Smart, Shop S-Mart."

S-Mart's first appearance in the Evil Dead franchise (and only on-screen appearance) was in the film Army of Darkness, but has since gone on to appear in various comic books and video games.

The early history of the S-Mart company remains mostly unknown, though we do know that it was founded sometime before the 1970s by a man simply known as "Mr. Smart", or one of his family members. The earliest known store was located in Detroit, Michigan in 1979. Unlike it's future larger department store-like locations, this S-Mart was a small convince store on a street corner set up more like a gas station, with snack foods, sodas, and magazines being their primary source of sales.

By the 1980s and 90s, S-Mart had expanded into a nation-wide chain of stores. One of the Michigan locations severed as the place of employment for Ash Williams. How long he had been employed with the company varies from universe to universe, though most versions of him seem to have been working at the store during the time he took a weekend trip to a cabin in the mountains. It is upon his return from the aforementioned trip (and 1300 AD) that various versions of Ash either choose to stay with the S-Mart company, choose to leave, or are outright fired.

The exterior of Ash's store (Shop 'Till You Drop Dead #1)

S-Mart, 20 years into the apocalypse (Army of Darkness: Furious Road #1)

The S-Mart Supercenter in New Jersey (Freddy vs. Jason vs. Ash #1)

The S-Mart of Los Angeles, California (Darkman Vs. Army of Darkness #2) 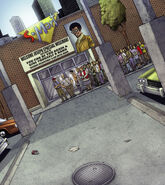 Ash's Oldsmobile is vandalized outside S-Mart (Ash Vs. The Army of Darkness #0)

Army of Darkness: Shop Till You Drop Dead #1 Cover

Army of Darkness: Shop Till You Drop Dead #1 Variant Cover

Ash & The Army of Darkness #1 Cover

The interior of S-Mart, as seen in Army of Darkness Defense