View source
watch 00:44
Who's Ruby on 'Ash vs Evil Dead'?
Do you like this video?
Play Sound

Dark One (formerly mortal in the future)

"Ruby" was one of the Dark Ones and author of the Necronomicon Ex-Mortis. While hunting Ash Williams, she went by the alias of "Ruby Knowby", claiming to be the daughter of Henrietta and Raymond Knowby and sister of Annie Knowby. She used the deaths of the Knowby family to recruit Amanda Fisher in her search for Ash Williams, telling her that he was responsible for the Deadite plague, and blaming him for the death of her "entire family".

Almost nothing is known about Ruby's life in the centuries prior to her hunt for Ash Williams, save for several key moments. With the aid of her fellow Dark Ones, Ruby created the text that would come to be known as the Necronomicon Ex-Mortis, presumably during the time in which evil reigned over the Earth. At another unspecified time, Ruby had a romantic affair with the demon known as Baal (though Ruby was under the influence of Baal's emotional manipulation powers), and became the mother of their offspring.

At some point, Ruby betrayed the other Dark Ones with the help of a human sorceress named Kaya, banishing the creatures to another dimension in order to have complete control of the forces of evil on Earth for themselves. With the Dark Ones gone, humanity managed to become the dominate species and conquered the remaining evil, forcing Ruby to keep a low profile.

Over the coming years, Ruby would cross paths with the likes of Genghis Khan and Attila The Hun, though nothing is known about these encounters. She would also be present in Ancient Rome and Ancient Greece, gaining the nicknames of "Demon Woman of Fire" and "Fierce Mother From Hell".

Sometime after Ash Williams had returned to the 20th century from 1300 AD, Ruby began her hunt to find and kill the mysterious "Chosen One" that had appeared in her book in a prophecy, seeing him as major threat since he was the only one to stop evil from completely taking over the world.

At some point in time, Ruby had learned about the events at the Knowby cabin, and decided to take on the alias of Ruby Knowby, crafting a backstory that she was the daughter of Raymond and Henrietta and the sister of Annie Knowby seeking revenge on Ash for killing her family. Ruby also somehow acquired Ash's evil right hand, presumably from journeying to the cabin itself.

After watching her partner, Carson, turn into a Deadite before she was forced to kill him, Officer Amanda Fisher was sitting in a restaurant with a cup of coffee trying to clear her head. Ruby then turned around and looked at the confused Amanda and asked her if she's alright. Amanda informed her that she believes she saw something (a child who she thought was a Deadite, but turned out to be perfectly fine) and tells Ruby that she cannot trust her eyes these days. Ruby, in turn, told her that there's nothing wrong with her sight and mentions that sometimes the things one see are actually real, and then leaves the young woman to her own thoughts while leaving the café. Ruby later claimed that she apparently wanted to tell Fisher more about the situation at the restaurant, but felt she wasn't ready to hear the whole truth yet.

A short time later, Ruby ran into Amanda at the occult bookstore Books From Beyond. She rescued Fisher from the Deadite Lionel Hawkins. Fisher then agreed to team up with Ruby to help her bring Ash to justice for killing her partner and Ruby's family. The two managed to track Ash back to the Brujo's farm, just missing him by a few minutes. As Ruby explored the Brujo's property, she was attacked by a Deadite comprised of the remains of the Brujo himself, and was dragged into a large fire pit, seemingly killing her. Amanda decided that she was going to pick up where Ruby left off and bring Ash in herself, taking Ruby's sportscar and tracking Ash to a diner.

Several hours later, Ruby emerged from the fire pit, and managed to find Pablo Simon Bolivar and Kelly Maxwell in the woods surrounding the Knowby cabin. Bolivar and Maxwell led Ruby to the cabin, where she finally came face-to-face with Ash Williams. She claimed that if Ash gave her the Necronomicon, she could put an end to the evil forces once and for all. Ash agreed and gave Ruby the book, but instead of stopping the forces of evil as she promised, she revealed herself to be the author of the Ex-Mortis and took Pablo into the cabin's fruit cellar to be the gateway for her Demon Spawn to enter the world of the living.

When Ash began his descent into the cabin's cellar, Ruby appeared to Ash in a vision, giving him the choice to let her unleash some of the evil contained within the book and act as the "Godfather" to them, leaving Ash to live peacefully in Jacksonville, or she'd kill Ash's friends. Ash chose the option to kill her instead, and was taken out of the vision. When Ash confronted the real Ruby, she once again gave him the option of Jacksonville. Ash agreed to the new conditions of the deal (Pablo would be released from the Necronomicon's power over him) and left Ruby with the book.

Six months after Ash, Pablo, and Kelly had gone to Florida, Ruby's spawn had turned against her, and sought the Necronomicon to unleash the demon Baal, their father. To prevent this, Ruby used Deadites to summon Ash for help and hid the book in a corpse in the Elk Grove hospital. While waiting for Ash to return to his hometown, Ruby hid in a crematorium where she encountered Ash and aids him in killing one of her spawn. After agreeing to team up, Ruby then followed Ash to his childhood house (where she is called "Bigfoot" by Brock Williams), and tasks Ash with finding the book. In Ash's absence, Ruby is attacked by a Deadite which she manages to kill just as Ash returns. Ruby asks for the book but Ash tells her it's safe in the Delta before it was immediately stolen.

Ash, Ruby, Pablo and Kelly are at a bar where Ash introduces them to Chet Kaminski, an old friend of his (who co-invented a dangerous drink called Pink Fuck, which has ketamine as an ingredient). Kelly deduces that Ash's plan is to attract the young thieves by throwing a large party, which Ruby grudgingly admits is not a bad plan. Ruby later finds Kelly sitting alone on the street and convinces her to join her in killing her spawn, which they succeed in doing so but they fail to stop the rise of Baal as Pablo was tricked into releasing him.

After Ash is arrested, Ruby, Kelly and Pablo arrive to free him but end up trapped in the police station, which Baal had infiltrated having disguised himself as one of the deputies. After an argument with Sheriff Thomas Emery, she shoots him in the leg before going off to find Ash's equipment. She encounters Deputy Polly, who later starts to seduce Ruby, who responds. Ruby discovers that the deputy is Baal in disguise. After revealing he knows that Ruby is now human, Baal disappears and manipulates the sheriff into becoming irrational while one of his skinned victims comes back and attacks the station, killing a prostitute.

Ruby tells Ash that Pablo is becoming one with the Necronomicon and is the only hope in banishing Baal. She tells Ash that she needs to cast a spell to speed up the process until they open the passage needed to send Baal back to Hell, which she eventually succeeds in doing.

The Ruby from the 1982 timeline returned, still evil because she never allied with Ash. With the power of the Necronomicon and a stolen human identity, she attempted to turn Brandy against Ash while racing against the banished Dark Ones to find a rift between the physical world and the underworld. She got help from her former best friend Kaya, a Knight of Sumeria who betrayed the order centuries ago and whose soul was sealed in the book. After failing to prevent the Dark Ones' return, they sentenced her to death for sealing them away, draining her soul and leaving only an empty husk.

Since Ruby is one of the Dark Ones, she seems to have immortality, having been alive for centuries. But after she released her demon spawn in the 21st Century, she claimed that her children stole her immortality and her ability to quickly heal from wounds. Ruby is shown to have enhanced strength, easily tearing off a car door, and shattering a person's skull. She also demonstrated telekinetic abilities when she summoned the Necronomicon and Kandarian Dagger to her hands, as well as when she seemingly shut/locked the doors of Elk Grove High preventing students from escaping.

Ruby seems to be adept at using various types of firearms, from handguns to assault rifles. She also appears to be skilled in using smaller weapons, like the Kandarian dagger, and adapt at hand-to-hand combat.

Since Ruby is the author of the Necronomicon Ex-Mortis, she is quite knowledgeable on the spells contained in the book, giving her an advantage over someone like Raymond Knowby or Ash Williams.

Ruby is a Dark One, therefore being half human, half demon and because of this, she has some humanity in her personality traits. Though Ruby can be cold hearted and rather impatient, she does seem to have a disdain for violence. Even when Ash was her enemy she told him she would rather form a peaceful truce than fight one another. She is capable of caring for her comrades as she gets close to Amanda and eventually even Ash, Pablo and Kelly. It seems Baal corrupted her personality through his influence as in her younger years she was far more evil and murderous. 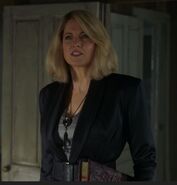