The Evil Dead
The Reel-To-Reel Tape Recorder was owned and used by Professor Raymond Knowby during the time when he was translating the Necronomicon Ex-Mortis.

The Tape Recorder first appeared in the 1981 film The Evil Dead, but later appeared in other forms of official Evil Dead media and merchandise.

The tape recorder is a standard Panasonic Solid State RQ-706S, presumably made sometime in the late 1960s. It's unclear when Raymond Knowby acquired the tape recorder, but it was in his possession by the 1980s.

Following his discovery of the Necronomicon Ex-Mortis in the ruins of Castle Kandar, Professor Knowby used the device to record his translations of passages found within the Book of The Dead. During one of these recording sessions, Knowby unleashed the Kandarian Demon upon his property, which turned his wife Henrietta into a Deadite. After subduing his wife by locking her in the fruit cellar of their cabin, Knowby made a new recording detailing the series of events that transpired following the accidental unleashing of the Kandarian Demon.

Events At The Cabin

Just a few days later, a group of five friends would journey to the cabin for a weekend trip, unaware of it's true ownership to the Knowby family. Two members of this group, Ash Williams and his friend Scotty, discovered the tape recorder in the fruit cellar, along with a strange knife called the Kandarian Dagger, and the Ex-Mortis itself. Later that night as a thunderstorm approached, the five gathered around the recorder and listened to Professor Knowby's tale of discovering the book, before eventually the recording of the Kandarian Demon's resurrection spell began to play.

After the woods seemingly came to life and violated his sister Cheryl, Ash went back to the tape recorder and listened to Knowby's final recording, explaining that the book and its spells truly did unleash a malevolent spirit in the forest.

The following night, Raymond's daughter Annie would arrive at the cabin, much to the surprise of Ash (who had become the lone survivor of the previous night's assault by the Kandarian Demon and the Deadites). Annie played another recording from the tape player, in which Raymond detailed the events surrounding Henrietta's possession.

More than 30 years after the events at the cabin, the tape recorder still remained intact, sitting on the floor of the cabin's living room. Covered with a fine layer of dust, the recorder was still able to function, though parts of the tape were warped. 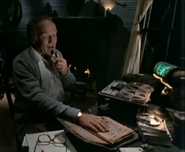 Raymond Knowby in the cabin's celler with the tape recorder, book, and dagger (Evil Dead II)