Mia Allen is the younger half-sister of David Allen, and a childhood friend of Olivia and Eric. In 2013, Mia encountered a malevolent supernatural force known as "The Taker of Souls" while on a weekend trip to a remote cabin owned by her family.

Though little is known about Mia's adolescence, it is known that she was born in 1987, and both her and her older half-brother David were raised in Flint, Michigan by their single mother.

Throughout their childhood and into their late adolescence, Mia and David would spend numerous vacations with their mother at their family-owned cabin located in Tennessee.

Sometime in Mia's young adulthood, her and David's mother developed an unspecified illness that effected her both mentally and physically. Around this time, David had recently moved from Flint to Chicago, Illinois for a job opportunity, leaving Mia to care for their mother on her own for an extended period of time.

As her mother's mental state rapidly deteriorated, Mia began using heroin as a way to cope with the growing stresses of looking after her. The elder Allan's condition eventually worsened to the point where Mia could no longer take care of her on her own, and she was placed in a medical facility to be looked after by professionals. At some point during this time, there was one day where Mrs. Allen mistakenly referred to Mia as David for an entire day, as her mind was no longer capable of differentiating the two. Mia later reflected on this incident to David, and told him that perhaps he was lucky not to have seen her in such a state. Eventually, their mother passed away while in the hospital.

Little is known about what happened in the time between Mrs. Allen's death and the trip to the cabin, with the exception of one major incident in 2012. Olivia and Eric staged an intervention for Mia after noticing an increase in her drug usage following her mother's passing, a "detox" session that lasted a total of eight hours before Mia started using again. Immediately following this, Mia overdosed on heroin and was legally dead for several minuets before being revived by paramedics with a defibrillator.

Incident At The Cabin

A year after Mia's overdose scare, Eric and Olivia organized another detox attempt, this time recruiting the estranged David to help. For this new endeavor, it was decided to take Mia to the family cabin in Tennessee, a location which neither her or David had been to in the years following their mother's initial diagnosis.

Mia, Olivia, and Eric were the first to arrive, with David (along with his fiancée Natalie and their pet dog Grandpa) arriving a few hours later. After reuniting with his sister, David gave Mia an amulet made from the wood of a buckthorn tree, a charm intended to make the will of it's wearer stronger.

Following a impromptu ceremony where Mia swore off drugs and dumped her remaining bit of heroin in a well, the group headed inside the cabin, surprised to discover that at some point it had been broken into by what they assumed to be locals looking for a good time. Immediately upon entering, Mia was hit by a foul stench of unknown origin, though no-one else in the party seemed to notice. Later that evening, the rotting aroma had become so overwhelming to Mia that she began to panic to the point where she needed to be restrained. Olivia, a registered nurse, initially believed this to be a sign of withdraw, though David soon discovered it was emitting from the cabin's fruit cellar. Venturing down into the basement, David and Eric found remnants of what appeared to be some sort of witchcraft ritual that was conducted in there, including the rotting corpses of dozens of small animals, as well as a shotgun and a book wrapped in barbed wire.

Mia began experiencing actual withdrawal symptoms later in the evening, marching around in a circle in front of the cabin in the rain. Inside the cabin itself, Eric was reading aloud a scratched-out incantation found within the strange book from the cellar, unknowingly awakening a dormant demon in the surrounding woods. The demon, known as "The Taker of Souls", appeared to Mia as a humanoid female figure in a white dress. Frightened by the figure's sudden appearance, Mia raced back into the cabin and began to frantically gather her belongings, demanding that someone get her away from the cabin. When everyone refused, Mia grabbed the nearest set of car keys and took off on her own. As she navigated down the muddy road, the woman in the white dress suddenly appeared in front of the car, causing Mia to veer off the road and crash into a pond. Temporarily rendered unconscious by the wreck, Mia made her way back to land, only to be chased by figure into a thicket, where thorny vines began to move on their own and ensnare her. The figure in the white dress appeared before the tangled Mia, and proceeded to vomit a living worm-like vine that violated the trapped human by slithering up her leg. David and the others soon found the wrecked car and a disheveled, shaking Mia sitting beside a tree, and took her back to the cabin.

Mia would try to find solitude in the shower, only for the demonic spirit within her to slowly take control of her body. After finding Grandpa the dog bludgeoned to the brink of death with a hammer, David instantly assumed Mia had done it in a fit of rage and barged into the bathroom, only to find his sister convulsing on the floor while boiling hot water begins to bubble and scar her skin. Placing her shaking body in the seat of his Jeep, David drives down the road only to discover the road has been flooded from the rain, forcing him to take Mia back to the cabin.

Believing Mia is asleep, David and the others discuss their plan once the creek waters settle back down and they're able to leave, only for Mia to slowly stagger into the den carrying a shotgun. Almost as if she's in a trance, Mia raises the gun and shoots out a window, with the blast hitting David in the shoulder. Mia lets out a scream before ominously telling the group they're all going to die tonight and collapsing to the ground. As Olivia goes to get the gun away from Mia, the girl suddenly spews a fountain's worth of blood on Olivia's face, forcing the nurse to push Mia into the open door of the fruit cellar. Eric leaps from his chair and shuts the door, trapping Mia below.

Shortly after Olivia's possession and death, Mia manages to lure Natalie into the cellar by pretending to be "cured" of her aliment. Trapping her on the broken stairs leading down into the cellar, Mia proceeds to infect Natalie by biting her left hand. Natalie managed to escape her attacker and head back into the upper cabin, though the bite quickly resulted in her left arm becoming possessed. Mia watched from the space between the floor and cellar door as Natalie took an electric knife and cut off her arm to prevent further infection.

After the death of Natalie, David planned on putting Mia out of her misery by burning down the cabin, as a "purification by fire" was mentioned in the strange book. Moments before setting the cabin ablaze, Mia began to sing a song their mother used to sing to them as children, and David couldn't bring himself to drop the lit match. David remembered another method of cleansing, a far less lethal method in which the body of the possessed could be buried under the soil of the Earth. David ventured into the dark fruit cellar to find Mia, and with the aid of the dying Eric, he managed to sedate her using some of Olivia's medication she had brought with her.

After completing the burial, Mia was released of her possession, and David revived her using a makeshift defibrillator created out of components from the nearby workshed. The two embraced, and she thanked him for not leaving her. As David went back into the cabin to retrieve the car keys, he was attacked by a possessed Eric. Mia rushed to her brother's aid, but he pushed her out of the cabin, insisting that she get out of there while he tries to stop Eric. Outside, Mia watched as a brilliant fireball erupted inside the cabin, as David used a shotgun to blast a gas can next to Eric.

Before Mia could make her escape, the sky began to rain blood, and a creature known as "The Abomination" arose from the ground. After unsuccessfully starting the car, Mia was chased into the workshed by the monster, and grabbed a nearby chainsaw to defend herself. During the chase, the Abomination tipped over David's Jeep, falling directly on top of Mia's left hand, forcing her to sever the appendage at the wrist. Getting back on her feet, Mia revved up the chainsaw and plunged it deep into the monster's skull, dragging the blade down and slicing the creature into two halves. The Abomination melted into the soil and the rain of blood subsided. With the death and destruction finally over, Mia stared at the glowing orange sunrise beaming through the trees, and began to stagger her way back through the forest.

What happened to Mia following these events remains unknown.

Appearances In Other Media

Mia after her brother gives her the necklace

Mia vows to stay off drugs cold turkey and dumps her drugs down a well.

Mia sees something in the forest while trying to stay clean.

Mia being raped by the trees.

The Evil Entity disguised as Mia

Mia skin is peeling as she is in a trance.

A possessed Mia scream after announces, in a possessed voice, that each one of them will die.

Possesed Mia locked in the cellar

Mia being burried alive by her brother as a deadite

Abomination Mia rises from the underworld and attack Mia

Mia being cornered by the Abomination

Mia and her chainsaw

Mia gets rid of the Abomination

Mia after surviving the night. 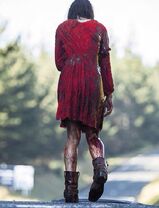