Linda was the girlfriend of Ashley J. "Ash" Williams, and good friend of Shelly, Scotty, and Cheryl.

Linda poses the role of the "damsel in distress" archetype, and during the second film, takes the role of main antagonist from Cheryl, Ash's sister.

Linda is 22 years old accompanied by Ash and her friends ventured into the Tennessee hills to vacation in an isolated cabin for their spring break. While there, she receives a necklace from Ash who professes his love for her with this gift, and also becomes quite concerned about Ash's sister Cheryl after seeing her suffer a nervous breakdown. When Cheryl becomes possesed by a demon, Linda was stabbed in the ankle with a pencil while trying to help her, and soon after falls very ill.

She ultimately became a deadite and taunted Ash before attempting to kill him. Ash managed to stop her and buried her after not being able to bring himself to dismember her with a chainsaw. Ultimately, she rose from the ground and attacked Ash once more, but she seemed to die when Ash decapitated her with a shovel in a struggle.

In Evil Dead 2, her death is shown again in a recap of the first film. Although, it was shown here that Linda was still not "dead". In a supposed dream sequence, she resurfaced and danced with her severed head, before attacking Ash through the window. Ash wakes up, thinking her rising was a dream, but her head then falls in his lap. Her head bites his hand and won't let go. Ash gets to the workshed and manages to get her head off his hand. As he looks for the chainsaw while her head pleads with him, her headless body enters and immediately attacks Ash with the chainsaw. Ash defeats her body and proceeds to destroy her head by cutting it with a chainsaw, finally killing her for good.

Linda appeared briefly during the beginning of Ash's flashback sequence. Her story is the same of the previous movies (she's Ash's girlfriend, becomes possessed, and dies, although these last two things were not shown).

Linda returns as a head yet again in the episodic series, taunting Ash again after he went into the shed for a crowbar to break the lock off of the cellar's door, and just like that had got himself shut inside. She gets the circular saws on the wall to launch at him. They miss, then Ash "kills" her once more.

A re-imagining of Linda appeared in the 2008 Dark Horse comic: The Evil Dead. Like her film counterpart, she is Ash's girlfriend and is later stabbed in the ankle by Deadite Cheryl. In a flashback scene, Linda tells Ash that he was the first person she had sex with, but Ash doesn't believe it.

Linda first appears in Army of Darkness comics in the first story-arc, Ashes 2 Ashes, when Ash and The Wise Man arrive to The Cabin before Ash is sucked into 1300 AD. The Ash who has returned from 1300 AD finds her (based on Bridget Fonda's Linda) outside The Cabin sitting by a fire, but when Ash gets close to her, she reveals that he is too late to save her and she is already possessed. Ash cuts her in half and tosses her into the fire. Linda, along with other Evil Dead characters, returns in the Old School story-arc to torment Ash one final time at The Cabin.

In the short story Ash Beyond featured in the one-shot comic Army of Darkness #1992.1, Linda is the girlfriend of SMART.COM employee Ash Williams, and goes to a digital simulation of a cabin with him for a quick romance session, but both her digital and physical body is possessed by the Necronomicon malware file. Ash is told a way to erase the file from Linda by a wise hacker, but unknown to him, while trying to put in the three word password into a computer, possessed Linda sneaks up behind him with an axe...

Ash: (to Cheryl/the Demon) You bastards, why are you torturing me like this, WHY?! (Deadite Linda laughs) (to Deadite Linda) Shut up.
Singing Deadite Linda: (to Ash and Scott): We're gonna get you (x2), not another peep, time to go to sleep, we're- (laughs and gets grabbed in her legs and put outside of the cabin by Ash with his hands) It's useless, USELEEEESS, in time, it will come for him (Scotty) and then it will come for you, (screams)!

Linda thanksfully with her gift.

A demonic and mischievous Linda. 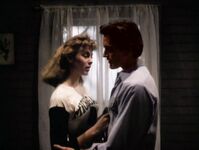 Linda and Ash in Evil Dead 2.

Linda in Army of Darkness 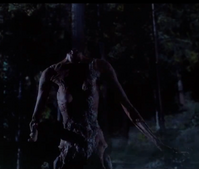 Linda's head in Ashes to Ashes