The Evil Dead
The Kandarian Dagger is a large dagger found by Professor Raymond Knowby while exploring the ruins of Castle Kandar. Since its rediscovery, it has fallen into many hands who use it to combat the forces of evil.

The Dagger first appeared in the 1981 film The Evil Dead.

The exact year of the Kandarian Dagger's creation and creator itself are unknown. According to Raymond Knowby upon his eventual examination of the dagger, the handle was carved from human bones.

At some point after the departure of Ash Williams from 1300 AD, the Kandarian Dagger was eventually discovered and placed in a special chamber in Castle Kandar. In the late 20th century, Professor Raymond Knowby, Henrietta Knowby, Annie Knowby, and Ed Getley discovered the dagger (along with the Necronomicon Ex-Mortis) in the castle's ruins. It was brought back to the Knowby's Cabin when Raymond and Henrietta returned to the United States.

Events At The Cabin

Ash Williams and his friend Scotty discover the Kandarian Dagger in the fruit cellar of the Cabin shortly after the group's arrival. Over the course of two nights, the dagger was used to fight against Deadites and was used to (accidentally) stab Jake in the chest. Later, Ash's severed hand stabbed Annie Knowby in the back with the dagger.

Some time between Ash being sucked back in time and the early 21st century, a Dark One calling itself Ruby Knowby found the dagger. When Ruby got her hands on the Necronomicon, she used the dagger to remove the flesh cover of the book. After Ash Williams made a deal with Ruby to unleash all the evil upon the world, Ash took the dagger from her "for insurance". When Ash returned to his hometown of Elk Grove, Michigan, he taped the Kandarian Dagger to the end of his Boomstick, creating a makeshift bayonet.

During a battle with the giant demon known as Kandar The Destroyer, Ash Williams launched the dagger at the monster using a tank. The Kandarian Dagger proved to be the only thing effective at harming, and eventually killing the demon. After its usage to bring down The Destroyer, the dagger's fate remains unknown.

Since multiple variations of the dagger exist in several alternate realities, each version seems to have a different ability. In the original "prime" universe, the dagger's blade burns the flesh of any supernatural entity it comes in contact with such as Deadites and even the Dark Ones, making it potentially one of the few ways to kill a Dark One. Demon Spawn are also known to be vulnerable to the dagger, as Ruby was capable of impaling one of her children in the back with it, causing the demon's demise.

The dagger is also able to send the souls of non-possessed entities (such as normal humans) to the Deadlands. In the reality where Annie Knowby escaped Hell, the dagger itself absorbed and contained the souls of its victims in its handle. Using a spell, the contained souls could be released from the dagger.

Brandy Barr weilds the dagger (The Mettle of Man) 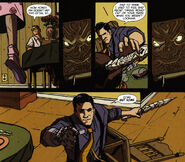 Kiko Nam kills a Deadite (Tales of The Ex-Mortis #3)