Fire In The Hole

"Fire in the Hole"

Ash and his group go to meet the militiamen, but find they have been attacked by a demon-possessed Lem. Lem attacks them again, and Ash and Amanda become trapped in the militia bunker with him.

Meanwhile Kelly and Pablo escape to the woods, but the militiamen, (thinking the two are government agents and their friend Lem is infected with a government virus), hunt them down.

Back at the Brujo's ranch, Ruby emerges from the funeral pyre unharmed, she goes to the diner and resumes her search for Ash.

Eventually Pablo and Kelly rescue Ash and Amanda and get the weapons from the militia, but Ash has unexpectedly vanished. A closing scene shows Ash's severed hand crawling through the woods toward the cabin.

Ash and his team proceed through the forest and he admits that he's still not sure if they should come to the cabin with him. Everyone that he's cared about has died there. However, he's willing to let them make their own decision. Now they'll get some big weapons from Lem and his militia group, Ash warns that the militia is a little twitchy.

The group hears someone calling for help and investigates. There are a half-dozen men torn apart outside of the militia camp and the place is in flames. One dying man tells them that "he" tore the place apart, and begs them to kill him. The other militia fighters arrive, yell that the dying man is one of the Deadites, and blows his head off.

The militia leader, Crosby, takes the group into the main hall and demands to know who they are and why they're there. Ash says that Lem said the militia could help them out, and one man thinks that he recognizes Amanda. She avoids saying that she's with the state police, just as something bangs on the roof and growls. Crosby explains that Lem got back to the camp an hour ago and started tearing people apart. Ash figures that Lem is possessed and advises Crosby not to send anyone outside. Crosby figures that the government infected Lem with a virus to turn him into a mummy, and Ash advises him to give them their weapons and get out of their way.

The Deadite Lem calls that he's going to get them, and Kelly yells back for the Deadite to come out and fight them. It doesn't respond, and the survivalist remembers that Amanda is a cop. Crosby figures that she's there to see if the government experiment worked, just as the outside door swings open. Nothing comes in and one survivalist goes over to investigate. He sees nothing, but then Lem drags him outside and then into a nearby bunker. Kelly and Pablo run out the back, but Crosby captures Ash and Amanda before they can follow. The survivalists handcuff them together and toss them into the bunker. Pablo and Kelly watch from the woods, and are forced to run when Crosby spots them.

At the Brujo's home, Ruby emerges from the ashes. She picks up the Brujo's skull and casually crushes it.

Lem snarls in the distance and some of the bunker lights go out. Ash and Amanda continue on, while Lem watches them from the shadows.

Pablo and Kelly avoid the militia search parties and hide in the woods.

The Deadite Lem finds Ash and Amanda, and throws kerosene on them. It lights a match and tosses it at them, but it goes out before it can ignite the kerosene and they run off.

As they hide, Pablo admires that Kelly knows exactly who she is by what weapon she wants. He asks her what kind of weapon guy she thinks he is. As they banter, a militia truck pulls up nearby. The two survivalists split up to search, and Kelly says that they only need one gun.

Kelly deliberately reveals herself to one of the survivalists and runs. She trips and when he's close enough, kicks him in the groin. Pablo takes his rifle, but the other survivalist captures Pablo.

Ruby goes to the diner and gets in her car, and discovers that Ash's severed hand is gone. She takes out the Dagger from its hiding place and drives off.

The survivalists tie up Pablo and Kelly and take them to the truck, and they insist that they're not with the government. As they argue, a gas-masked Deadite staggers up and grabs Austin, the man in the back. He rips out Austin's throat and kills the other man, Crosby, when he comes to investigate. Pablo manages to start the truck and backs up, while Kelly tries to kick the Deadite away. He finally backs into a tree, crushing the Deadite. Kelly congratulates Pablo, who frees her, and Pablo suggests that he's a pickup truck kind of guy. She grabs a gun and tells Pablo to put on the gas mask from the corpse, and then they'll rescue Ash. Pablo reaches for the mask and the Deadite tries to grab him, and Kelly shoots it until it goes down. Shocked, Pablo punches the inert corpse until Kelly stops him.

At the bunker, Ash and Amanda find an exit but a locked gate blocks their way. There are nearby tanks of propane and Ash figures that they can blow Lem up. The propane cage is locked as well, and Amanda spots a nearby pickaxe. She tells Ash to follow her lead and then calls for help.

The gas-masked Pablo drives back to the camp and get close enough to Crosby so that Kelly can take him prisoner.

The Deadite arrives and drinks kerosene, and then comes at them with a flare. Ash kicks off part of its skull, and Amanda and Ash both kick it to the ground. The Deadite grabs another flare and tosses a can of diesel fuel on the ground next to the first one, and then leaps on a cage and breathes fire on them. Ash knocks it down and the fuel trickles toward the flare. He knocks the flare into a bucket of water, and Amanda grabs the pickaxe and drives it into the Deadite's skull. Turned on, Ash and Amanda start to kiss... and Pablo and Kelly open the outside door.

Ash and Amanda come outside and discover that Kelly and Pablo have tied up all of the remaining survivalists. They've found the militia weapons, and Pablo accidentally fires off a missile. He opts for a revolver instead and Kelly says that it looks good on him.

Meanwhile, Amanda finds the keys and removes the cuffs. Another Deadite staggers forward, and Kelly, Pablo, and Amanda blow it away as the survivalists scream for help. Amanda gives Crosby a knife and tells him to cut everyone free and get as far away as possible. As the group heads for the car, Ash says that each of them has a special place in his heart. They start to walk away but then turn back... and discover that Ash is gone. 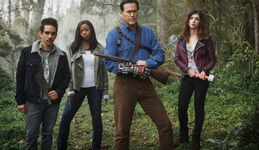 (From left to right)
Pablo, Amanda, Ash and Kelly 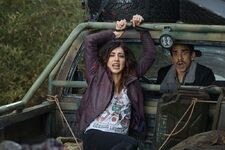 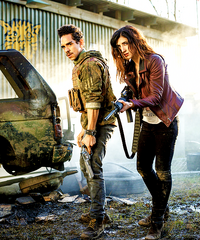 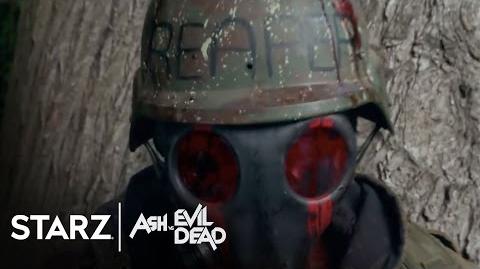 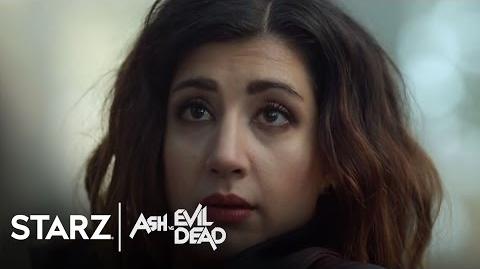