Evil Dead: Regeneration is video game for PC, Xbox, and PS2. A what-if scenario that takes place between Evil Dead II and Army of Darkness depicting what might have happened to Ash had he not been taken back in time. It is unconnected to Evil Dead: A Fistful of Boomstick a previous game in the series.

Instead of being sucked into the vortex at the end of Evil Dead II, Ash has been placed in a mental institution for the criminally insane as a result of the events of The Evil Dead and Evil Dead II. His doctor has gone mad and obtained the Necronomicon Ex Mortis and releases the deadites once again.

The game begins in Sunny Meadows, an asylum Ash is committed to. Ash is briefly visited by his lawyer, Sally. Sally talks about how she found Professor Knowby's diary and believes Ash's story about the Necronomicon and the cabin. Ash thanks her, but just as she is about to leave Ash comments on her wardrobe and advises her to wear more revealing clothing. Just as Sally leaves, Reinhard accidentally unleashes the dead through the Necronomicon. The evil also breaks Ash free in the process. Ash travels through the asylum killing deadites with a pistol he retrieved from a dead security guard. He eventually finds his clothing, his boomstick and his chainsaw in the process. As he goes through the asylum, Ash finds an electric deadite named Sparky. Ash kills Sparky and decapitates him. Ash briefly breaks the fourth wall as he speaks to the camera and throws Sparky's head away. Ash proceeds through the nearby cellar. However, just as he is about to leave the asylum, Professor Knowby appears to Ash and tells him about Reinhard and what he plans to do. Ash, however, refuses to try and stop him and begins to leave. Professor Knowby also speaks about how Sally is in danger for taking his diary. Ash decides to stop Reinhard just to save Sally. Professor Knowby talks about how he needs to close deadite portals, but he cannot do it alone. Knowby introduces Ash to Sam, a short half deadite who will respawn if killed, and Ash quickly makes a bad first impression on him by shooting him dead. Sam knows all the necessary incantations to close the portals. Ash and Sam travel through to a cemetery and eventually find a portal in the nearby catacombs. However guarding the portal is a large deadite queen. Ash kills the queen with Sam's help and Sam closes the portal.

Ash and Sam go through the woods surrounding Sunny Meadows to find it infested with deadites as well. Ash finds a harpoon gun in a trash pile and modifies it onto his right hand. Ash and Sam, with the help of his harpoon gun, make their way into an abandoned mine where they find another portal. However, as soon as they get there a spirit possesses a miner. Ash and Sam kill the deadite miner and close the portal. Professor Knowby tells them that Reinhard has his diary finally and needs a human sacrifice. Ash believes that Sally is the one he intends to sacrifice. Ash and Sam follow a mine shaft towards nearby docks where another portal is believed to be located. Ash goes to another trash pile there and finds a high powered torpedo gun. Ash and Sam make their way to the portal to find it guarded by a giant fish creature who Ash calls "The one who got away." Ash kills the fish creature and Sam closes the portal. They both go through the nearby swamp.

Ash and Sam make their way through the swamp. Ash finds a shack full of flammable materials and creates a flamethrower. Ash and Sam make their way through the swamp to a nearby town called Port Turnham which is infested with Deadites. They make their way through the destroyed city and in the process Ash replaces his chainsaw with a newer one with a titanium blade. Ash and Sam find a portal in a nearby courthouse. However, Sam succumbs to fatigue and yawns while he is saying the incantation. The portal, instead of closing, sucks both of them into it. Once they are inside the portal Ash and Sam find themselves in a hellish dimension. Professor Knowby shows up telling them the only way out is to defeat Reinhard and rescue Sally. However, he begins talking about how Ash must save the world in which Ash becomes very angry and says he is only out to save Sally and maybe Sam.

Ash and Sam face many obstacles in the deadite temple. After much struggle they make their way to Reinhard's lair where he is just about to sacrifice Sally. Rienhard says how impressed he is with Ash. However, he apologizes that they had to come a long way to die. Rienhard uses the Necronomicon to turn himself into a troll-like deadite. Ash and Sam kill Rienhard and Sam closes the portal. In a very romantic scene Ash says he came a long way and overcame great odds to apologize to Sally on the fashion advice he gave her back at Sunny Meadows. Just as he is leaning to kiss Sally a spirit possesses her. Ash, overcome with rage, kills the possessed Sally. However, just as he does this the portal reopens and sucks Ash and Sam into it along with the Necronomicon which ends the game. This is possibly Ash being sent into Army of Darkness as a way to connect the game and the movies.

The gameplay mostly consists of hack and slash with small conveniently placed puzzles. The player takes the role of Ash Williams as he fights off hordes of Deadites. The player can find different kinds of weapons in levels which find use in different situations. Early on in the game Ash receives his sidekick Sam who fights along with him in battle. Unlike other games where killing a friend ingame is taboo at best, Sam actually comically dies many times in the game. The player can kick Sam into openings to open doors or onto enemies to pop their heads off. The player can also possess Sam to get through small openings; the purpose is to open a door or a switch. At times, Sam is controlled by the computer and destroys adversaries without assistance. Sometimes enemies will need a 'finishing move' (pressing a specific button) in order to completely destroy them.

In contrast with previous games, the game automatically gives the player unlimited ammunition for his weapons and unlimited gas to his chainsaw. A new gameplay element is rage mode. When the player kills enough enemies it fills up his rage meter. When the rage meter is filled up to a decent amount it allows Ash to go into "rage mode". Rage mode transforms Ash into a powerful deadite killing machine. It instantly doubles all of Ash's weapon damage and makes him lose health slower.

Through the game, Ash collects six weapons that can be used to kill the Deadites. Some are also used to pass environment puzzles, like wooden barricades or bridges.

Ash collects three firearms throughout the game, and are collected in this order:

Since Ash lost his right hand to the deadites, he decided to replace it with weapons. Ash collects 3 of them through the game, although technically he has four:

During his escape from the Asylum, Ash manages to recover his clothes and weapons (boomstick and chainsaw) from the Morgue. However, when the corpses change into deadites and awaken, Ash says "Yeah baby. Sing for the King" - despite the fact the game is set before Army of Darkness when he was offered to be King.

Evil Dead: Regeneration was met with mixed reviews. Aggregating review website GameRankings and Metacritic gave the PlayStation 2 version 69.17% and 68/100, the PC version 67.75% and 69/100 and the Xbox version 67.13% and 66/100. However, in later years, Evil Dead Regeneration has been highly lauded by Evil Dead fans for it's similar blend of horror and humor in keeping with the films, it's unique 'What If?' storyline as well as Bruce Campbell's voice performance.

It's considered by many fans to be the most 'true' Evil Dead video game to date. 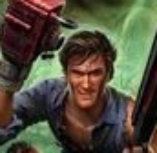