This is about the upcoming video game releasing in 2022. You might be looking for the 2011 Evil Dead: The Game by Trigger Apps.

Evil Dead: The Game is an upcoming video game developed by Saber Interactive, Boss Team Games, and Lionsgate Games, set for release on PlayStation 4, PlayStation 5, Xbox One, Xbox Series X|S, Nintendo Switch, and PC in May, 2022. The game marks the first time in Evil Dead franchise history that all three studios that own their respective films in the series (Renaissance Pictures, StudioCanal, and MGM) have partnered to create a single product, with the addition of STARZ allowing elements from the Ash vs Evil Dead television series as well.

(From official press release): The game is being developed by Boss Team Games published Saber Interactive. The game will be available sometime in 2021 for the PS4, PS5, and Xbox Serie X/S/One, Nintendo Switch, and PC.

Based on the “Evil Dead” franchise and characters created by Sam Raimi, Robert Tapert, and Bruce Campbell, the game casts players against the forces of evil that have been unleashed from the Necronomicon Ex-Mortis, with sights and sounds inspired by the films “The Evil Dead,” “Evil Dead II: Dead by Dawn,” and “Army of Darkness,” as well as the STARZ original “Ash vs Evil Dead” television series.

Plenty of surprises await in this gore-filled battle against the evil that captures the characters, horror, humor, and action from the franchise. Battle across memorable locations including the infamous cabin in the woods brought to life with tons of terrifying visuals and all-new dialogue from Bruce Campbell. Discover more than 25 weapons, including Ash’s Gauntlet, Boomstick, and chainsaw, and advance in a variety of skill trees to grow stronger and survive in this fun co-op and PvP experience.

The game was initially teased by Bruce Campbell in August, 2018, several months after the cancellation of the Ash vs Evil Dead television series. Throughout 2019 and into 2020, Campbell was mostly silent on the subject of the game outside of saying that it was still in development and that he would voice Ash Williams (as he had previously done in such games as Evil Dead: Hail To The King, A Fistful of Boomstick, Regeneration, and Dead By Daylight). Outside of this, the only other Evil Dead cast member to speak about the project was Ray Santiago, who stated in 2018 that was involved with the game, but unsure at the time if he was allowed to talk about it.

On January 5th, 2021, actress Dana DeLorenzo announced via Twitter that she would reprise her role as the voice of Kelly Maxwell for the game. On January 9th, 2021, Ray Santiago confirmed his involvement with the project during an online Ash vs Evil Dead cast reunion panel and that he was returning to voice Pablo. After the subject of the game was brought up during this panel, Campbell implied that the game's developers were bringing in actors who had been involved with the series since the original film, but did not name anyone specifically.

Evil Dead: The Game was officially unveiled with a trailer at the Game Awards show on December 10th, 2020. The game was going to be showcased earlier in the year by Bruce Campbell at San Diego Comic Con, New York Comic Con, and E3 2020, but these conventions were cancelled due to the COVID-19 pandemic.

On June 10th, 2021, a video showing gameplay was broadcasted during the Summer Games Fest online showcase. This footage showed off several new playable characters, including Henry The Red, Ed Getley, Amanda Fisher, Eligos, Cheryl Williams, and Evil Ash. An audio narration provided by Bruce Campbell explained that the primary objective of the game was for "living" players to collect weapons and several pages of the Necronomicon Ex-Mortis in order to banish the Kandarian Demon. Players could also be on a team consisting of Deadites, who try to stop the human players from achieving their goal. 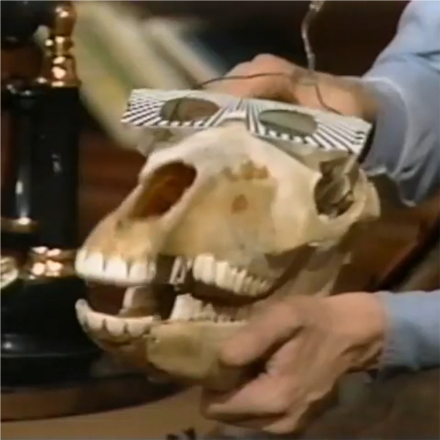