Evil Dead II (as a hallucination)
Army of Darkness(physical)

Bruce Campbell
This page is about the Evil Ash seen in Evil Dead II and Army of Darkness. If you are looking for another version of this character, check the Evil Ash Disambiguation page.

Evil Ash (also known as Bad Ash) is a demonic doppelganger of Ash Williams. In the year 1300 AD, the clone led an army of Deadites against an army of humans in a siege on Castle Kandar in an attempt to get his hands on a copy of the Necronomicon Ex-Mortis, but was ultimately defeated by his "goody little two-shoes" counterpart.

Evil Ash first appeared as a hallucination in the 1987 film Evil Dead II, but made his "physical" debut in Army of Darkness. He was portrayed by Bruce Campbell.

An early version of Evil Ash first appeared in The Cabin in Evil Dead II. This Evil Ash lunged at the real Ash from a mirror, and began to strangle him, but as Ash tried to get away from him, only to find that he is strangling himself. it's unknown if Evil Ash was really there at all.

Shortly after being brought back in time to England in 1300 AD, Ash was on a quest for the Necronomicon Ex-Mortis. During Ash's journey for the Book of The Dead, he was chased through the forest by the Kandarian Demon. This chase forced Ash to seek shelter from the demon in a windmill just outside of the forest. During Ash's stay at the windmill, he thought he saw someone standing in the windmill watching him as he went outside. Ash was willing to fight whoever he saw watching him, and charged at the man, who did likewise. As it turned out, Ash saw his reflection and ran face first into a mirror. With the glass of the mirror in pieces, tiny versions of Ash hopped out of the mirror itself. One of these Mini-Ashes jumped into the mouth of the normal Ash, and began to attack the large Ash from the inside. To put an end to this, the normal Ash drank a pot of boiling water to hopefully kill the Mini-Ash, but it only made Ash's situation worse.

The Mini-Ash began to grow out of Ash's right side, and eventually completely separated from the original Ash. Once the two separated, Evil Ash began to beat up his "goody little two-shoes" counterpart until good Ash shot him in the face with his Boomstick. Evil Ash was then strapped down to a table, chopped up, and buried in front of the windmill. When Ash found the Necronomicon in the graveyard, he forgot the last of the three magic words and accidentally awoke the dead, including Evil Ash. Evil Ash started rounding up the resurrected dead, and led them in the attack on Castle Kandar to get the Necronomicon and take over the world. Good Ash fought Evil Ash during the battle, and eventually set him on fire, reducing him to a skeleton. Evil Ash survived, though, and jumped down onto a catapult that, unbeknownst to him, had a gunpowder bag that was accidentally lit only moments ago by Ash's torch. Ash activated the catapult, catapulting Evil Ash into the air with the bag of gunpowder, which exploded, completely destroying Evil Ash and forcing the remainder of his army to retreat. 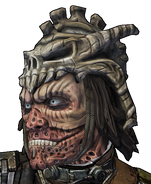 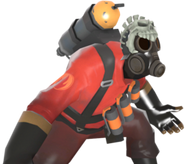