Eligos is a "Demon of the Mind" summoned from the Necronomicon. It appears in the Books from Beyond episode of Ash vs Evil Dead.

It is described as a minor demonic entity but displays impressive amounts of power, rendering both Ash and Pablo helpless and even possessing Kelly undetected for a period.

Eligos is the demon summoned by Ash in an attempt to get information on how to undo the chaos caused by the book of the dead. However, during the questioning Amanda interferes and causes Ash to accidentally break the binding circle, allowing Eligos to be released. In the ensuing chaos, Eligos is seemingly banished when Kelly hits it with the book, unbeknownst to everyone, it actually possessed her and remained dormant within her until the group arrived at the residence of Pablo's uncle.

Eligos eventually takes control of Kelly and starts manipulating the others into performing a potentially fatal exorcism on Ash. During this, Eligos attempts to trick Pablo into killing himself by getting to smoke weed through a gun barrel that Eligos put a cartridge in. Pablo's reluctance eventually causes Eligos to lose patience and reveal itself, also at this point Ash convinced the brujo that it was Kelly that was possessed and they arrive to help Pablo.

Eligos is restrained and the exorcism is attempted on it, however it resists all attempts and even starts to damage Kelly's body by spitting out a tooth and bashing her head against the pillar it was tied to. Pablo tricks Eligos into leaving Kelly's body but before it was killed by Ash, it managed to kill Pablo's uncle.

Eligos makes his comic debut in the Army of Darkness: Ash For President One-Shot in a brief one page cameo.

Though an apparent minor demonic entity, it has proven itself to possess powers that causes its victims both physical and mental anguish. 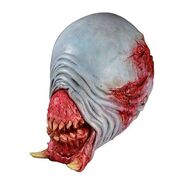