Richard Domeier
Ed Getley was Annie Knowby's boyfriend and Raymond Knowby's assistant. He was present when Raymond Knowby found the Necronomicon Ex-Mortis in the ruins of Castle Kandar. Ed's first (and only) appearance was in Evil Dead II.

Not much is known about Ed's early life prior to the events at the Knowby's Cabin, except he became Professor Knowby's assistant. While exploring the ruins of Castle Kandar in England, Ed, Professor Knowby, Henrietta Knowby, and Annie Knowby found the Necronomicon Ex-Mortis and the Kandarian Dagger.

When the Knowby family and Ed discovered the book of the dead, Raymond, Henrietta, and Ed returned to the United States, while Annie chose to stay in England to continue excavating Castle Kandar. One week after her parents and Ed returned to America, Annie came back herself with more pages of the Necronomicon. Ed met her at the airport and informed her that he hadn't heard from her parents for over a week. The two set off to the Knowby family cabin, but their trip came to an abrupt end when they discovered that the only bridge was out. However, two locals offered to take Ed and Annie through the woods to a trail that led right to the cabin.

When the group finally arrived to the cabin, they were shocked to discover a one-handed man covered in blood and firing a double-barrel shotgun. When the group managed to enter the cabin and knock Ash out, the Knowby family was nowhere in sight. Spotting a nearby chainsaw sitting a pool of blood, the group quickly jumped to the conclusion Ash had either killed the Knowbys or had something to do with their disappearance, Ed and Jake then threw the man into the fruit cellar.

When Annie played her father's reel-to-reel tape recorder, the group discovered that Raymond had unleashed a Kandarian Demon, which attacked Henrietta and turned her into a Deadite. When the group went to release Ash from the cellar, Ed was attacked by the Kandarian Demon and became a Deadite. Without hesitation, Ash grabbed an axe and chopped up the Deadite Ed, killing him.

Ash charging at Evil Ed with his axe

Evil Ed's head cut in half 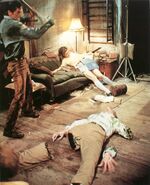 Behind The Scenes of Evil Ed