Denise graduated from John Glenn High School, Westland, MI in 1983 where she starred in many plays and musicals. She also appeared on a Detroit television show "Kelly and Company" where she sang and danced with fellow John Glenn students Leo Daignault and Richard Winfrey, accompanied by Sean Robinson. She sang in the school's concert choir as well as the show choir "Chamber Singers" director by then teacher Bruce Graden.

Behind the scenes photos 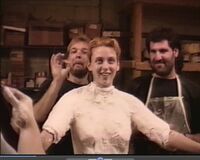 The body cast
Add a photo to this gallery

Retrieved from "https://evildead.fandom.com/wiki/Denise_Bixler?oldid=12970"
Community content is available under CC-BY-SA unless otherwise noted.