Castle Kandar (also sometimes referred to as Ca'n Dar Castle) was a castle located somewhere in England in the 12th Century. In 1300 AD, while the castle was under the rule of Lord Arthur, the prophesied "Hero From The Sky" arrived from the future to fight the supernatural forces of evil plaguing the land around the fortress.

While first mentioned in The Evil Dead, Castle Kandar made it's physical debut in the 1987 film Evil Dead II.

It is unknown when exactly Castle Kandar was constructed, though it had been firmly established and long-occupied by the year 1300 AD.

After opening a rift in time in the woods of 1980s Michigan to dispose of an evil entity that had claimed the souls of his friends, Ash Williams had unwittingly been pulled into the vortex and dumped just outside of Castle Kandar's walls in 1300 AD. Captured by Lord Arthur's men, Ash was brought inside the castle walls, where he was to be killed for the castle's occupants entertainment in a hellish swamp-like "prison" called The Pit. Successfully defeating the monstrosities residing under the castle, Ash was brought into private chamber and treated like royalty before departing on a quest to retrieve the Necronomicon Ex-Mortis.

Ash acquired the Book of The Dead and returned to the castle with the intent of immediately using the book's magic to go back to his proper time. While on his quest, Williams had accidentally resurrected the "residents" of the graveyard where the Necronomicon resided. Under the command of a doppelganger of Williams known as Evil Ash, an army of Deadites attacked Castle Kandar in an attempt to retrieve the book for themselves. With the united armies of Lord Arthur and Henry The Red, the battle for what might have been the fate of the world took place in the castle's courtyard. When the dust settled and the skirmish was over, the army of the living was victorious, and Ash Williams eventually left the 12th Century and returned to 1982.

Sometime after this epic confrontation between good and evil, Castle Kandar was abandoned and left to crumble by it's medieval residents. Left behind was the Necronomicon and the Kandarian Dagger, which had been placed in one of the castle's inner chambers on a pedestal.

Several centuries would pass, and the castle would be rediscovered by Professor Raymond Knowby in the 1980s. Exploring the ruins with his wife Henrietta, daughter Annie, and associate Ed Getley, Knowby found the Ex-Mortis and the dagger under a fine layer of dust and webs on the stone pedestal where they had been left from by the Middle Age occupants. While Raymond and Henrietta returned to the United States with the book and dagger, Annie Knowby remained at the castle for another week, eventually uncovering the lost pages of the Necronomicon hidden somewhere in the archeological site.

What happened to the castle after Annie's departure remains unknown.

With a throne fit for a king and various weaponry hanging from the walls, Ash briefly occupied Arthur's chamber and battled a Deadite Witch in this room.

The Wise Man is seen to have a study in one of the castle's towers. In this chamber, he gave Ash Williams the potion which would return him to his proper time.

On Earth-818793, Sheila had her own luxurious bedchamber inside the castle, presumably due to her being the sister of one of Arthur's best knights.

During the attack of Evil Ash and his army of Deadites, the Book of The Dead was locked behind an iron gate with two guards stationed outside beside it. The Necronomicon was later moved deeper inside the castle, where one day it would be discovered by Raymond Knowby.

Disconnected from the castle itself, the workshop is it's own independent building facing the center of the courtyard. Ash Williams and The Blacksmith construct the Metal Gauntlet and the Deathcoaster here.

Nestled in the corner of the castle's courtyard, and marked by a horizontal steel ring laid out around it's boarder, The Pit was possibly an ordinary cave system located underground and discovered during the castle's construction. When the forces of evil were unleashed upon the land, Lord Arthur's men managed to capture two Deadites and lock them in The Pit below. At the bottom The Pit, directly below the hole leading to the surface, were two walls of metal spikes which could be activated above by a crank.

As Ash was dragged into the castle as a prisoner, he passed a bustling marketplace before being brought over to The Pit, primarily made up of wagons clustered together.

After the formation of Lord Arthur and Henry The Red's alliance on Earth-818793, Henry returned the bodies of Arthur's men that he had killed in battle, and a graveyard was created on one of the castle's corners. As both Arthur and Henry had fallen in battle against the armies of darkness after Ash's departure, their graves were marked by life-sized statues of the two.

Castle Kandar, as seen from the valley below (Evil Dead II)

The castle's drawbridge (Army of Darkness)

The mountain range behind the castle (Army of Darkness) 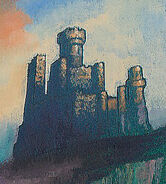 The castle, as seen from a distance (Army of Darkness Movie Adaptation #2)

The castle, as seen from a distance (KISS/Army of Darkness #2)

An alternate design of the castle's ruins (Evil Dead 2: Beyond Dead By Dawn #1)

Ash lands outside the castle, where he's confronted by knights (Army of Darkness Defense)

The castle, shrouded in a cloud of fog (Army of Darkness Movie Adaptation #1)

The entrance to The Pit (Army of Darkness)

An alternate design of the courtyard (Army of Darkness: Ashes 2 Ashes #3)

The castle's graveyard, and the statues of Arthur and Henry (King For A Day #13)

Interior of the Blacksmith's workshop (Army of Darkness)

Interior of the Blacksmith's workshop (Army of Darkness)

An unspecified women's recreational room (Tales of Army of Darkness')

Behind the model of Castle Kandar used in Evil Dead II

Concept art of the castle exterior created for Army of Darkness

Artwork for an unused court room inside the castle

Concept art of the Blacksmith's workshop