This article is about the episode, for Pablo's uncle see El Brujo.

David Frazee
"Brujo" is the fourth episode of the first season of Ash vs Evil Dead, and the fourth overall episode in the series. It was written by James E. Eagan and directed by David Frazee.

After dealing with the demon, Ash leaves the uncooperative Amanda handcuffed in the bookstore and trapped with a demonic-undead Lionel. She is saved however by Ruby, and after learning of her interest in Ash, the two join forces in hunting him down. Meanwhile Pablo takes Ash to meet his shaman uncle, a "Brujo", who may be able to help. Along the way Kelly gets sick and acts strange having been unknowingly possessed by Eligos. Eventually the Brujo gives Ash a drug-induced vision of himself relaxing on a pier in Jacksonville, Florida, (Ash's favorite fishing spot), where his pet lizard Eli appears telling him he must bury the Necronomicon deep in the place where everything started – the cabin in the woods. During the trip, a possessed Kelly attacks Ash.

The Deadite-possessed Lionel advances on the handcuffed Amanda, who manages to get her gun. She shoots the Deadite but it keeps coming and chokes her. Ruby comes in and beats the Deadite with a lamp. When he breaks it in half, she stabs it through the chest and pins it to the wall. When Amanda wonders who she is, Ruby says that she's her new best friend.

As Ash drives to Pablo's uncle, Kelly lies in the back of the car and clutches at her head. She finally tells Ash to pull over and vomits out the window. Once she's done, Kelly says that she got a concussion and it'll pass, and tells Ash to keep driving. Ash has Pablo put on some music, and Pablo says that they're close. The Deadites close in on the car and the electronics go crazy. The windows go up and the doors lock, and Ash sees the Deadite cloud in the rear mirror. He speeds up and the car swerves all over the road, destroying a passing car. Ash opens a tank of nitrous and tells Pablo to hit the switch. Pablo reluctantly does so and the car speeds away... until the engine overheats. The Deadites slam into the back of the trailer, but they get to Pablo's uncle. When they pass through the gates, the Deadites are repelled by the talismans. Ash brakes to a halt and Pablo explains that the talismans repel evil. Kelly clutches at her head again.

At the bookstore, Ruby explains that when a Deadite enters a human spirit, they're transformed. She figures Amanda wasn't ready to believe the truth, and Amanda says that she does now. Ruby says that Ash killed her parents and her sister Annie 30 years ago in the cabin, and let loose the Deadites. Ever since then she's been looking for revenge. The Deadite comes back to life and tries to grab Amanda, and says that they know who Ruby is. Ruby decapitates it and tells Amanda that they both want Ash, and maybe they can help each other out. She offers her hand and after a moment, Amanda takes it.

Ash and the others walk up to the uncle's house. Pablo explains that his uncle accused him of turning his back on his heritage. The brujo comes out and says that he was expecting him, and complains that Pablo has always taken the easy road. Pablo says that he knows that he's wrong now, and he believes that Ash is El Jefe. The brujo calls Ash over and examines him, and then says that he's weak and lazy. Meanwhile, Kelly looks at one of the talismans and hears a screaming in her head. She finally backs away from it, and the others turn to check on her. She goes to the trailer to get an Advil, and the brujo tells Pablo to tend to her while he sees what is inside of Ash. Inside, the brujo prepares maggots into a bowl and tells Ash to speak what he knows. Ash explains that he accidentally unleashed the Deadites and watches as the brujo grounds up the maggots. The brujo figures that people underestimate Ash and warns that a lack of self-awareness will make it difficult for him to find answers. He puts some of the maggots into a drink and offers it to Ash, and admits that it's a hallucinogenic. Ash drinks it as the brujo chants.

In the trailer, Kelly is taking Advil when Pablo brings in a box of electronic components and says that they're going to surprise Ash with a new hand.

Ruby takes Amanda out to her car and shows her Ash's real human hand, still twitching. She explains that it recently started twitching and figures that it's looking for its owner.

Ash says that he isn't feeling anything, and the brujo tells him to focus or Ash will be trapped in his personal hell for eternity. He blows smoke in Ash's face and continues chanting, and Ash sees an eyeball in his mouth. Ash then relives old TV shows, Playboy magazines, his previous encounters with the Deadites, and music videos. Ash suddenly finds himself lying in a grave, his eyes stitched shut. The brujo's voice echoes, telling him to see without sight. Hooded figures close in on him, and the brujo tells him to act like El Jefe and just fight back. The stitches disappear, and Ash realizes what he's facing. His chainsaw appears on his hand and Ash tells them to back off. The brujo tells him to go to a safe place, and a two-handed Ash finds himself standing outside the safest place he knows: Jacksonville, Florida. The brujo appears and asks what is so special about Jacksonville. Ash explains that he booked a vacation there, but ended up at the cabin instead.

Pablo works on the hand and Kelly tries to deal with her headache. She finally goes to the bathroom and looks in the mirror, wondering what's happening to her. She collapses, moaning, and the Deadites take her over. Pablo hears the noise and comes to check, unaware that Eligos has possessed Kelly. She yanks the curtain aside and tells Pablo that she feels much better. Pablo goes back to his workshop and Kelly advances on him, and then plugs in his tool for him. It shorts out, knocking Pablo across the room.

Ash relaxes with two beers and the brujo tells him he will find what he seeks there. His lizard Eli tells Ash to stop screwing around, and the Necronomicon appears in Ash's hand. Eli tells him that it's the answer he's been seeking, and he has to bury it deep beneath where his journey began. The brujo disappears, and Ash throws the Necronomicon into the ocean.

Kelly runs inside and tells the brujo that Pablo got electrocuted and needs his help. The brujo tells her to watch an unconscious Ash and goes to the trailer, and Kelly advances on Ash's body.

Storms gather in Ash's vision and he finds himself back in the cabin. Eligos advances on him.

Eli tells Ash to get Eligos out of his trip or Ash will be stuck there forever. Ash finds himself in a jar on a shelf, and Eligos starts shattering the jars one at a time. He breaks Ash's jar, and Ash finds himself back at the store's stock room. Eligos smashes him back and Eli tells Ash to end the nightmare or Eligos will control him forever. Ash takes control and says that it's his trip and his rules.

In the real world, Ash's body grabs Kelly's throat and chokes her. The brujo and Pablo run back and Pablo knocks Ash out with his uncle's pestle. Kelly hugs him, and Pablo is unaware that her eyes are solid black. 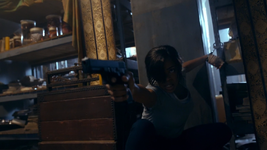 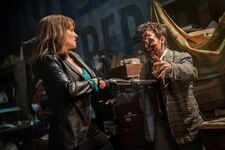 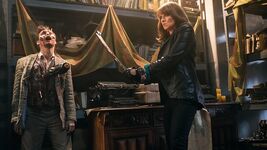 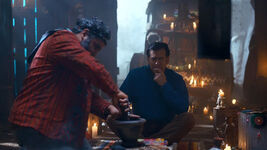 Ash ponders if he can trust the Brujo's methods 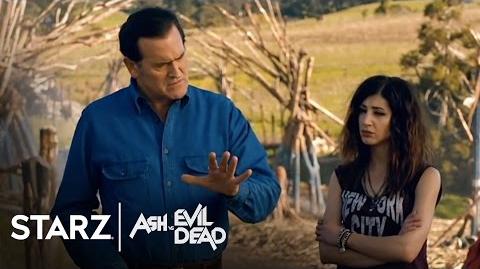 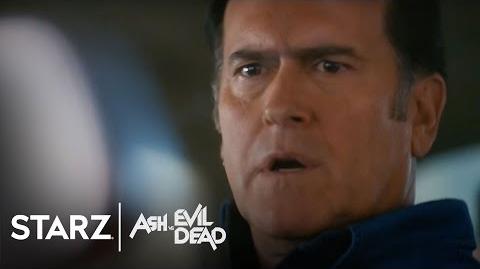