Tony Tilse
"Bound In Flesh" is the ninth episode of the first season of Ash vs Evil Dead, and the ninth overall episode in the series. It was written by Rob Wright and directed by Tony Tilse.

Pablo and Kelly confront the two Ashes and once they realize who the impostor is they kill him. Ash decides to chop up the bodies of the impostor and Amanda before they turn into Deadites, but the hikers return. Pablo and Kelly lead them away while Ash dismembers his clone. Suddenly the Necronomicon starts talking to him, trying to convince him not to bury it. He throws the book in the refrigerator then notices Amanda has disappeared.

Amanda, now a Deadite, attacks Pablo, Kelly and the hikers. She kills Brad and his wife and breaks Heather's leg. Ruby arrives however and Amanda runs off.

Returning to the cabin, Ruby confronts Ash, introducing herself as the one whose been cleaning up his mess. She explains that the book cannot be simply buried but needs to be dismantled. Ash agrees to destroy the book and cuts off it's face, but once he hands it over Ruby begins a ritual to unleash the evil upon the entire world. Ruby claims to have written the Necronomicon and the face of the book animates and attaches itself to Pablo.

Pablo and Kelly stare at Amanda's corpse in the cabin's living room and wonder what is going on. The door slams shut behind them and they hear sounds of a struggle from the next room. Going in, they find Ash struggling with his evil twin, Hand-Ash. Pablo and Kelly fire into the air, and both Ashes stop. They both insist that they're the real one and the other one killed Amanda. They both know things that only the real Ash would know. One Ash finally says to shoot them both, and Pablo and Kelly both gun down the other one.

Once the real Ash recovers his hand, he wonders how they knew it was really him. They point out that he tried to take the easy way out, and Ash is forced to agree that he's only concerned about himself. Ash tells them what happened and figures that the sooner they bury the bodies, the better.

As he starts to cut up the bodies, Brad and the two women call out as they approach the cabin. The trio goes out and the younger sister, Heather, says that Brad got them lost. He asks if they can crash there, and Ash admits that there are a few dead bodies inside. Kelly and Pablo quickly cover, saying that they're animal bodies. When Brad persists, Ash talks to Kelly and Pablo inside. He insists that if the hikers stay, they'll get possessed and go berserk. Pablo disagrees, and Ash tells him and Kelly to take them to Elk rapids via the back trail and then come back to help him. Once Ash goes inside, Pablo tells them about the change in plans.

Pablo and Kelly soon lead the hikers down the trail, and Heather thanks Pablo for leading them to Elk Rapids. She wonders what they're up to, and says that if Pablo didn't have a girlfriend then she'd get it out of him. He wonders what she means, and Heather tells him that Kelly said he had a girlfriend. A tree branch shakes and Pablo draws a gun on it and takes Heather's hand.

At the cabin, Ash chops up his evil clone. The blood puddles around the Necronomicon, and the Book starts talking. It calls to Ash, saying that burying it is a mistake. The Book says that he should use it, and warns that if it's buried then Ash will stop being a superhero and go back to being a stock boy. Ash says that he has possibilities and tosses the Book in the refrigerator.

When Ash goes back to the living room, he discovers that Amanda's corpse is gone.

In the forest, the group continues down the trail. Pablo complains to Kelly that she lied about him having a girlfriend, and she tells him that it's not a good idea to get involved with someone at the moment. Something growls ahead and after a moment, it charges out of the brush. Pablo and Kelly gun down... a raccoon. Something else moves, and Brad says that they should check it out before shooting it. His fiancé agrees... and a possessed Amanda rams her hand through her chest. She uses the woman as a shield until Kelly and Pablo run out of bullets, and then drives her hand into the woman's skull. Brad fires a flare at Amanda and misses, and she rams her other hand into his skull.

As Kelly and Pablo reload, Amanda does a ventriloquist act using the two corpses, mocking Kelly and Pablo. The Deadite uses the corpses as shields when Pablo and Kelly open fire again, and then tosses the bodies at them. Heather screams and runs, and Amanda goes after her. She easily catches the girl and slashes her across the face, and prepares to peel the skin from her face. Pablo arrives and Amanda tosses Heather aside, and then grabs him by the throat, lifting him into the air.

Suddenly Ruby leaps through the air and breaks the grip, and Amanda says that Ash did it to her. As Kelly arrives, Ruby takes out the Dagger and demands the truth. The Deadite has Amanda says that they can still be together, and Ruby says that she'd like it but their time hasn't come yet.

Heather wakes up and sees the bloody wound on her leg. Ruby glances away and when she looks back, Amanda has disappeared into the forest. She complains about amateurs and walks away, Pablo bounds Heather's broken leg, and Ruby starts chopping up the corpses. Ruby says that she's going to stop Ash from turning more people into monsters, and explains that the Necronomicon is the cause of all the trouble. As long as Ash has the book, a trail of dead bodies will follow and Ruby orders Kelly and Pablo to take her to Ash.

Ash goes to the tool shed to get his shotgun. When he comes back, Ruby and the others are waiting. She wants the Book that he stole from her family. Ash says that he has been trying to save the world for the last 30 years, and Ruby tells him that she's been cleaning up his messes. She says that it has to stop and demands the Necronomicon, and Ash explains that he learned via a drug trip that he has to bury the Book to end the Evil. Ruby says that it's a stupid plan and yanks his shotgun into his face. They fight until Kelly breaks it up, and Ruby says that if the Book is just buried then some other fool will eventually dig it back up. She tells them that the only way to keep the Deadites from coming back is to use the Kandarian Dagger.

Ash wants to talk to his friends first. Pablo agrees with Ruby and thinks that she smells nice. Kelly figures that it's too good to be true, and they all figure that there's nowhere they can go but up.

Inside the cabin, Ash gets the Necronomicon and puts it on the table. Ruby explains that they have to deface the Book with the Dagger... literally. As he cuts the face off of the Book, it begs him to stop. Ash finally cuts the face free and tosses the bloody mess on the floor. Ruby tells Ash to present the Book to her, completing the ritual of ownership. Ash hesitates and Ruby suggests that it's time for him to let someone else take the burden. After a moment, Ash gives her the book. Ruby opens it and begins chanting, and a storm brews outside.

The cabin shakes and cracks open in the earth. The peeled face cover floats into the air and the amulet that Pablo's uncle gave to him drifts into the air. The cover slaps onto Pablo's face, and Kelly tries to pull it away while Ash grabs the Book. Ruby blasts him back with magical energy and says that she knows what she's doing... because she wrote the Book. 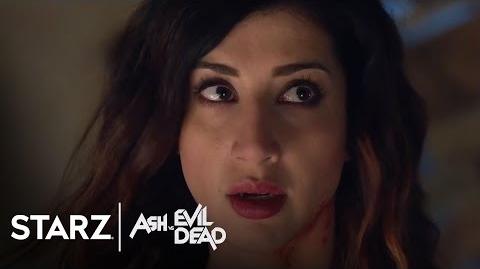 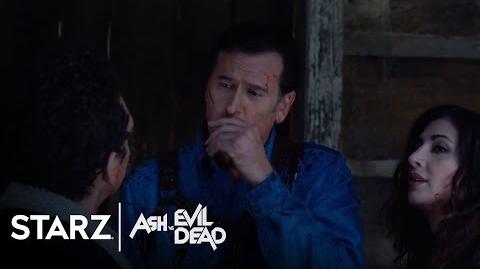