"Books from Beyond" is the third episode of the first season of Ash vs Evil Dead, and the third overall episode in the series. It was written by Sean Clements and directed by Michael J. Bassett.

With the mysterious Ruby one step behind them, Ash and his friends seek out Lionel, the owner of an occult bookstore, "Books From Beyond", to find a way to undo the evil curse. Lionel uses the Necronomicon to summon the demon Eligos in hopes of compelling it to give the answers Ash seeks. The ceremony goes awry when Amanda arrives to arrest Ash and Eligos escapes the summoning circle. In all the chaos, Ash does manage to get a cryptic response that the solution to his predicament resides within him.

Ruby drives through the night and finally arrives at the Maxwell farm. She finds the Maxwells' graves outside and one of the crosses shakes and then falls over. She reaches to touch it and the Deadite possessing Kelly's father reaches up and grabs her wrist. Ruby pulls free and then hauls the Deadite out of the grave. When he refuses to confirm that Ash was there, Ruby impales him on the other cross and asks if Ash had the Necronomicon. The Deadite laughs, saying that she's hasn't learned a thing, and Ruby says that she's learned that she can always make things more painful as she takes a ceremonial dagger out. The Deadite begs her to stop, but she traces a cut around its face and it screams in agony.

Ash, Pablo, and Kelly arrive at Books From Beyond and Ash warns that the owner, Lionel Hawkins, is somewhat strange. Pablo gives Ash the Necronomicon, and Ash says that he's sure Lionel can translate the book. He figures that he's a lone wolf, and assures Pablo that it never gets lonely. Ash goes inside and rings the counter bell. Lionel comes out and Amanda follows him. She thanks Lionel for his help and says that she'll be in touch. Once Amanda leaves, Ash takes out the Necronomicon and Lionel examines it, shocked.

Outside, Amanda calls the FBI office to have her contact, Lee, send her the sketch of Ash. It comes through a minute later.

Lionel confirms that the Necronomicon is real and insists that it proves his life has meaning. He opens the book and the lights flicker.

In her car, Ruby senses the book opening and speeds up.

The Deadite force roars through the forest.

In the car, Kelly tells Pablo that he's like the little brother she never had. He's less than thrilled at the idea, and Kelly assures him that she trusts her. As they talk, Amanda gets out of her car with her gun and goes into the bookstore. She orders Ash down, and Pablo knocks her out from behind... and then realizes that he knocked out a cop. Ash turns over the closed sign and handcuffs Amanda to a rack, and tells Kelly to watch her while he, Lionel, and Pablo rid the world of evil in the next room.

Lionel tells Ash and Pablo that the Necronomicon is a gateway to Hell. In Ancient Times the Dark Ones created the book as a weapon against humanity. They made the book out of human flesh and wrote it in human blood, creating passages opening portals connecting the real world to Hell. Lionel says that the book is harmless unless wielded by someone very evil or very stupid. Ash has Lionel confirm that there is a passage about a reversal, and it lies within the origin of Man. He admits that the translation is shaky, and Ash figures that they can summon a demon to translate. He tells Lionel to summon a weaker demon for them.

Lionel draws a summoning circle and warns them not to break the lines. He assures Pablo and Ash that it's perfectly safe, but Pablo isn't convinced. Lionel says that he's been waiting his entire life to commune with the darkness, and Ash figures that they're calling the shots. The owner finds a minor demon, Eligos, who possesses knowledge of hidden things. Eligos prays on the mentally and emotionally weak, and Ash says that it's perfect. Lionel casts the spell and the shop shakes.

Amanda warns Kelly that everywhere that Ash goes, people die. Kelly doesn't want to hear it, and points out that she'd be dead if not for Ash. Amanda admits that her partner turned into a monster and she had to kill him, and Kelly says that the same thing happened to her. However, she insists that Ash helped her.

Lionel continues the summoning and the store continues to shake. The candles flare up and then blow out, and storm clouds form above the building. In the other room, items start flying through the air. The boards heave up and Amanda promises Kelly that she won't hurt her friends if she releases her.

The portal opens and Eligos appears. Lionel warns Ash and Pablo not to break the circle, and Eligos addresses Ash by name, demanding why he summoned it. It offers information in return for its freedom. When he refuses, Eligos advises him to die quickly. Ash realizes that it can't break through the circle despite its threats, and tells Lionel to send it back to Hell. Amanda comes in and fires a warning shot, and orders Ash to drop his weapon. She fires another shot when he refuses, and Ash accidentally breaks the circle.

Eligos pulls Ash in and Lionel tries to send Eligos back. The demon breaks a vein in Ash's skull as Amanda fires another warning shot. Eligos teleports over to her and knocks her back, and Ash grabs his shotgun. Eligos teleports around the room and Ash tries to shoot it without success. As Ash reloads, Eligos sends shards of glass flying at Lionel, killing him. The demon magically reaches into Ash's head again, and Pablo grabs Amanda's discarded gun. He tries to shoot the demon in the head, and it teleports away. The demon appears behind both of them and tortures them, and vows that humanity's time is at an end.

Kelly runs over, grabs the Necronomicon, and hits Eligos with it. It disappears for good, returned to Hell. Ash sends Kelly and Pablo out to the car with the book, and helps Amanda up. She handcuffs him and he removes his wooden hand, and handcuffs her to a table. He goes outside and Kelly complains that Amanda lied to her. Ash warns her that cops don't help, and says that he learned the answer might be inside of him. Pablo says that his uncle, El Brujo, could help them, but admits he hasn't talked to him in a long time and he won't be happy to see him. Ash says that they have to get going, and Kelly reminds him that he thought he was a lone wolf. Ash admits that he would have been dead if not for them, and Pablo puts on the music as they drive away.

Meanwhile back at the store, Amanda is trying to get free when she hears something moving in the wreckage. The Deadite-possessed Lionel staggers to his feet and lunges at her. 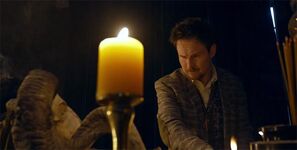 Lionel searches for the 'weakest' demon that can help Ash 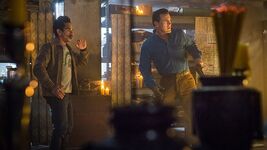 Ash and Pablo watch as Eligos is summoned 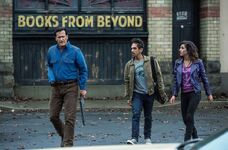 The gang goes in search for Pablo's uncle, El Brujo
Add a photo to this gallery 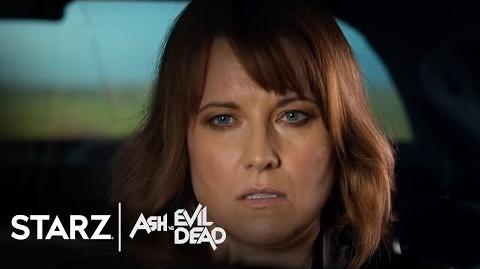 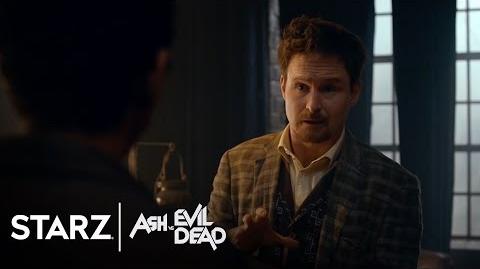 Ash vs Evil Dead Ep. 103 Clip Gateway to Hell STARZ
Add a photo to this gallery
Retrieved from "https://evildead.fandom.com/wiki/Books_from_Beyond?oldid=11122"
Community content is available under CC-BY-SA unless otherwise noted.