Tony Tilse
"Ashes To Ashes" is the eighth episode of the first season of Ash vs Evil Dead, and the eighth overall episode in the series. It was written by Michael J. Bassett and directed by Tony Tilse.

Armed with his chainsaw, shotgun and the Necronomicon, Ash returns to the sinister cabin after 30 years. He finds Amanda behind him who convinces him that he shouldn't face the evil alone.

Meanwhile Kelly and Pablo are lost in the woods but find a group of hikers consisting of Brad, his fiance and Heather, who lead them toward the cabin.

At the cabin, Ash is taunted by the severed head of his old girlfriend Linda that he left in the work shed three decades ago. In the cabin, Amanda listens to the old tape recorder about the Necronomicon. Ash suddenly appears and tells her that they should just leave and be together, but Amanda notices his putrid hand and he attacks her. She manages to cut off and destroy the hand, but imposter-Ash impales her on the antlers of the deer head in the living room. The real Ash then finds Amanda just before she dies.

Pablo and Kelly return and Ash tells them that she was killed by another evil-Ash that is running around somewhere.

Ash walks through the woods to the cabin, and finds a dead bird on the ground. A Deadite animates it briefly and Ash throws it into a tree, smashing it. Continuing on, Ash spots the cabin and arms himself. As he goes toward the cabin, Ash remembers being there with his girlfriend Linda. He steps onto the porch and braces himself, and hears a twig break behind him. Ash spins, shotgun drawn, and realizes just in time that it's Amanda. She says that she, Pablo, and Kelly split up to look for Ash, and asks why Ash ran out on them. He says that he has to do it alone because everyone else dies there, but Amanda insists on helping him.

The duo goes go into the cabin and when Ash closes the door, a stuffed stag head falls off the wall. Amanda remembers her partner dying on a similar head and then coming back to life. They go to work and Ash explains that he had a vision about the Necronomicon being buried there, where it all started. He points to the cellar and tells Amanda that bad things are down there. The trapdoor is chained and Amanda asks for a crowbar to open it. Ash says that it's in the toolshed, but there's something out there that she shouldn't see: his ex-girlfriend Linda. He explains that the Deadites possessed Linda and he was forced to cut her head off with a shovel. Amanda agrees to stay behind and watch the book.

Once Ash leaves, the table collapses and the Book falls onto the floor. In the walls behind it, Ash's severed hand crawls past... and regrows itself.

Pablo and Kelly wander through the woods, lost. They go in circles and arrive back at the car, and spot three hikers. The hikers notice the guns that Pablo and Kelly are armed with, and Pablo convinces them that they're hunting evil bears. Relieved, the hikers explain that they passed the cabin a while back but the man, Brad, wanted to press on. The single female hiker smiles at Pablo, and Kelly asks for directions. Brad and his fiancée agree.

Outside the house, Ash starts the generator and the lights come on. He hears Linda calling to him from the toolshed and tries to go inside, only to discover that the door is jammed. Ash sets down his shotgun to get the door open, and goes inside. Linda's skull is still in the vise, and the door slams shut as Ash finds a crowbar. When he tries to open it, the doorknob comes off in his hand. Ash pounds on the door and calls to Amanda.

In the house, the clock chimes and Amanda confirms that the pendulum isn't moving. She advances on the nearby trapdoor and finds a reel-to-reel tape player nearby, slowly turning. When she reaches for it, it shorts out.

Pablo, Kelly, and the hikers head for the cabin. The hiker who flirted with Pablo privately asks Kelly if he has a girlfriend. She lies and says that he does. Brad points them down the trail to the cabin, and Pablo suggests that they don't wander through the woods. The single hiker is eager to stay, but Brad and his fiancée insist that they're one with nature and they continue on.

As Ash pounds on the door, Linda calls to him. He finally turns to look and sees her restored head in the vise. Linda complains that he killed her, and reminds him that they had a life planned. Ash insists that she's just a head and tries to pry the door open, and Linda figures that he likes Amanda. She says that Amanda is going to die there, just like everyone that Ash has ever loved.

Amanda hears a piano playing and goes to investigate. She enters the room and finds a rat running across the keys. Amanda sees a notebook with sketches of the Necronomicon and reads the notes about the Kandarian Dagger. She looks up and sees Ash in the doorway. He says that they should leave because it's easier to run. When Amanda points out that he has a responsibility, Ash insists that he's right and she knows it, and suggests that they go somewhere together where they can start over. Amanda admits that she likes him, and Ash says that he knows that he's no catch. But before everything happened, he had a future that didn't involve demons. Now he wants to find that guy again and asks Amanda if she can help him. Amanda says that she'll think about it, and Ash moves in to kiss her. She says that it's not the time or the place, but Ash says that life is short and kisses her.

Linda warns that Ash can't save Amanda, and says that he already has a girlfriend. She tells him to come to her because no other woman wants him, and the sound of a chainsaw fills the shed as the cut on Linda's head reopens. The saw blades shoot out the wall and just miss Ash, embedding themselves in the wall. A bear trap animates and attacks Ash, and he fends it off as Linda giggles.

Amanda runs through the house but Hand-Ash grabs her and slams her around the room. He chokes her, but Amanda manages to grab a cleaver and cut the right hand off. As Hand-Ash screams in pain, Amanda chops up the severed hand and turns to face Hand-Ash. He says that the evil influence is gone and he's free, but then attacks her. Hand-Ash grabs the cleaver and drives it into her neck, and Amanda pulls herself through the house as her attacker says that it'll soon be over. She falls over and impales herself on the antlers.

The bear trap grabs Ash's metal hand and manages to pull it off. Linda tells Ash that Amanda is already dead, and he smashes the head in. He then kicks the door open and heads for the house.

Hand-Ash tells Amanda that they knew she'd try to help Ash, and Amanda promises that they'll send the Deadites back. Her attacker says that Ash can't do anything right, and leaves her to bleed out. Ash comes in and finds Amanda dying in the living room. She tells him what happened and he says that it's better where she's going, and kisses her goodbye. Amanda dies, and Hand-Ash comes in to taunt Ash before running off.

Pablo and Kelly come in, and Ash explains that he has a twin who killed Amanda. He goes off to find him, and Hand-Ash attacks him from behind. They fight, each knowing the other's weaknesses, and they both choke each other in a struggle to the death. 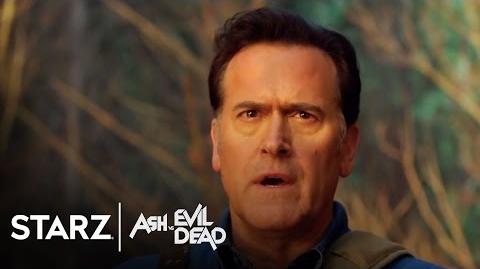 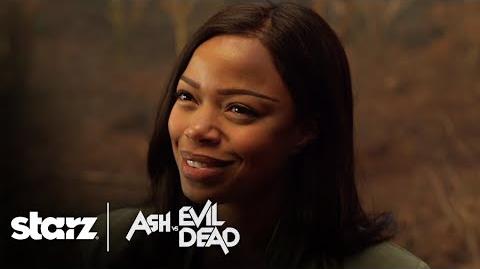 Ash vs Evil Dead Ep. 108 Clip Lady, I Like Your Style STARZ
Community content is available under CC-BY-SA unless otherwise noted.
Advertisement