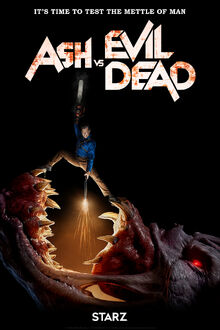 On October 5th, 2017, Starz issued the following press release along with a teaser poster: "Grab your chainsaws and watch out for Deadites because the grooviest show on TV returns in all its Ash-kicking splendor with more grisly battles, ghoulish banter and more blood-drenched fun than ever. The highly anticipated 10-episode third season of STARZ Original horror-comedy series “Ash vs Evil Dead” will premiere on Sunday, February 25, 2018 at 9PM ET/PT.

The wickedly gore-filled series stars Bruce Campbell as Ash Williams, the chainsaw-wielding anti-hero tasked with saving the world from evil; Lucy Lawless as Ruby, the unpredictable foe and occasional ally who has strong ties to the origin of the “Necronomicon;” Ray Santiago plays Pablo Simon Bolivar, Ash’s loyal sidekick and eternal optimist; and Dana DeLorenzo returns as Kelly Maxwell, orphaned in Season One and ready to kick some evil ass.

The third season finds Ash’s status in Elk Grove, Michigan has changed from murderous urban legend to humanity-saving hometown hero. When Kelly witnesses a televised massacre with Ruby’s fingerprints all over it, she returns with a new friend to warn Ash and Pablo that evil isn’t done with them yet. Blood is thicker than water in the battle of good vs Evil Dead!"

The first episode premiered on February 25, 2018, on STARZ. As was the case with Season 1, all following episodes will be 30 minutes long, airing on Sundays.

Retrieved from "https://evildead.fandom.com/wiki/Ash_vs_Evil_Dead_Season_Three?oldid=13402"
Community content is available under CC-BY-SA unless otherwise noted.